Kamala Harris Is Good for the Economics Profession

Her ascendance to one of the country’s top offices will encourage more Black women to participate. 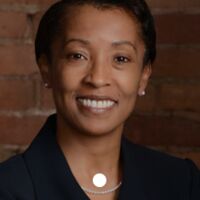 Rhonda Vonshay Sharpe is the founder and president of the Women’s Institute for Science, Equity and Race, and co-editor of the Review of Black Political Economy. Her research focuses on gender and racial inequality, diversity in science and the demography of higher education.
+ Get alerts for

For more than 50 years, the economics profession has sought to increase the number of Black people and women in its ranks. But one event might achieve as much for the intersection of those groups — Black women — as any of the best-intentioned initiatives: the emergence of Kamala Harris as vice president of these fractured United States.

When Harris took the oath of office, millions witnessed the shattering of the glass ceiling that has kept Black women out of the country’s highest offices — including, potentially, the presidency. (By emphasizing the vice president’s blackness, I do not mean to erase her South Asian heritage. I’m simply acknowledging that many Americans will see her as Black.)