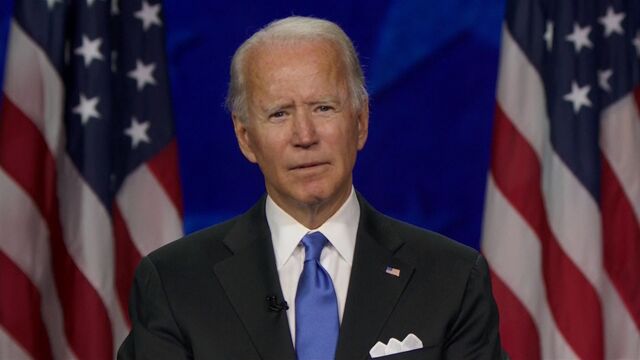 Joe Biden challenged Americans to embrace the “path of hope and light” as he accepted his party’s nomination Thursday, in an emotive and emphatic speech that cast November’s election as not merely the choice of a president but a fundamental referendum on the nation’s character.

“May history be able to say that the end of this chapter of American darkness began here tonight,” Biden said in offering the closing argument of the Democrats’ virtual convention.

“I will be an ally of the light, not the darkness,” Biden said.

He spoke from a stage in a near-empty auditorium. The unusual setting let the former vice president play to his strengths as a retail politician, connecting his personal experiences of grief and loss to the coronavirus pandemic that he will use to frame voters’ decision in less than three months.

He sharply condemned President Donald Trump -- while never actually mentioning him by name - and offered his vision to confront the health and economic devastation wreaked by the virus, as well as the “perfect storm” of racial unrest and climate change. As Biden spoke, the camera pulled in tight to capture his passion at key moments, giving the speech an intimacy and directness instead of the usual pageantry and spectacle of a crowded convention hall.

Trump spent weeks making the case that “Slow Joe Biden” wasn’t mentally capable of delivering his big speech, let alone leading the country. But the constant criticism allowed Biden, who spoke without major stumbles, to exceed expectations as he accused Trump of cloaking the nation in “too much anger, too much fear, too much division.”

Vice President Mike Pence, in a rebuttal to Biden’s speech, said Friday morning that Biden was silent on key issues like China, and that Republicans plan to draw a stark contrast next week between their plan while painting Biden as beholden to his party’s left flank.

“Joe Biden has been in Washington for 47 years and the speech that he gave last night was more of the same talk,” Pence told the “Fox & Friends” program. “Joe Biden and the Democratic Party have been overtaken by the radical left, and look, we’ll talk about that.”

Still unclear is how much momentum Democrats’ “unconventional convention” will provide Biden as he heads into the final months of the campaign. His address culminated a four-day show of unity, with every minute of the nightly coverage fully scripted and vetted to stick to Biden’s message.

Media outlets dramatically scaled back their coverage, and elected officials didn’t congregate in Milwaukee or Wilmington, Delaware, where Biden spoke. That served to keep the usual party squabbles from playing out in wall-to-wall coverage or sideline interviews with disgruntled delegates.

The convention was the first time in this campaign that the party was able to demonstrate that unity of purpose, with Biden capturing the nomination after a bruising primary contest that concluded at the height of the pandemic. He’s had little opportunity to rally his party’s diverse factions since winning the nomination, instead confined largely to virtual events.

“There’s more at stake for Biden than Trump because we haven’t really heard from Biden for the last three months or so -- he and the Democratic Party needed to find their voice, not just in registering a critique against Trump but articulating a pathway forward,” said William Howell, a professor of American politics at the University of Chicago.

Aides have indicated that Biden is unlikely to dramatically step up his travel and event schedules as the coronavirus pandemic continues, meaning the speech might be one of his last opportunities to fully seize the attention of the nation.

So far the campaign has not announced any public events involving the top of the ticket for the week following the convention, dispensing with the traditional post-convention barnstorming tour. Instead, the campaign is planning early-voting and other events in key states, as well as ways to react to next week’s Republican convention. Vice presidential nominee Kamala Harris is expected to lead the attacks.

Biden allies believe that his cautious approach -- stridently adhering to public health guidelines -- is a balm to a country that has endured years of the chaotic atmosphere in the Trump White House.

But it’s a risky strategy that could see Biden largely cede media attention to the incumbent, whose ferocious desire for television coverage, willingness to flout coronavirus restrictions and access to Air Force One essentially ensure that he’ll drive the conversation through Election Day. It also increases the importance of the three scheduled presidential debates this fall, turning each event into a high-stakes test for Biden.

Still, Democrats appeared largely pleased with the week’s proceedings, which provided time for each segment of the former vice president’s electoral coalition. Biden devoted significant parts of his speech to addressing the concerns of his party’s left flank, pledging to be a president for young Americans.

“They’re speaking to the inequity and injustice that has grown up in America,” Biden said. “Economic injustice. Racial injustice. Environmental injustice.”

The first time Biden emerged from self-quarantine after the virus hit was to go to downtown Wilmington to meet with peaceful protesters following the death of George Floyd at the hands of Minneapolis police. On Thursday, he painted his campaign as one for “communities who have known the injustice of the knee on the neck.”

“History has thrust one more urgent task on us. Will we be the generation that finally wipes the stain of racism from our national character? I believe we’re up to it. I believe we’re ready,” Biden said.

“It suits the time, and the advantage is being able to feature regular people in their own spaces,” he said.

Republicans – including former Secretary of State Colin Powell, former Ohio Governor John Kasich, and Cindy McCain, the widow of 2008 Republican nominee John McCain – were also given time to extol Biden’s decency. Like other speakers, former New York Mayor Michael Bloomberg, who challenged Biden for the nomination, focused his critique of Trump on performance not personal behavior.

The party organized full days around two voter groups – women and people of color – Biden will need to win the White House.

But liberal activists chafed at Biden’s decision to feature Republicans and give moderate Democrats -- like the 17 rising centrists who comprised the key note speech-- prominent speaking roles, particularly as progressive stars like Representative Alexandria Ocasio-Cortez were allowed only brief opportunities to address the convention.

The convention featured breakout moments, from former President Barack Obama’s impassioned call to action to Harris’s eager embrace of the history she was making as the first Black and Indian-American woman on a major-party ticket. And while the party struggled – particularly in the opening days – to produce gripping content that might encourage Americans to tune in, unique moments including calamari-pitching delegates from Rhode Island to a performance by popular teen singer-songwriter Billie Eilish generated viral attention.

Even Obama conceded that it was possible the convention was unlikely to change many votes.

“I know that in times as polarized as these, most of you have already made up your mind,” he said. Polls bear that out, and show Biden with about a 7 percentage-point lead over Trump that hasn’t wavered much in months.

But on Thursday night, Biden argued that Americans “know in our bones” that the election was more consequential than most.

“So,” Biden said, his voice rising, “the question for us is simple: Are we ready? I believe we are.”

— With assistance by Josh Wingrove