‘We’re not getting new supplies and our stores are almost depleted.’

By
Ben Elgin
and
John Tozzi
Updated on

‘We’re not getting new supplies and our stores are almost depleted.’

By
Ben Elgin
and
John Tozzi
, 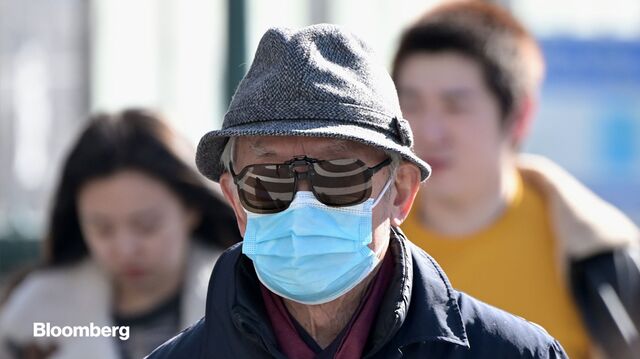 Can a Face Mask Stop the Coronavirus?

Hospital workers in Washington state have been making protective medical gear out of office supplies and other run-of-the-mill materials as they deal with a severe shortage of equipment needed to care for patients who may have Covid-19.

Among the supplies coming in handy: clear vinyl sheets.

“We are very close to being out of face shields,” said Becca Bartles, executive director of infection prevention at Providence St. Joseph Health, a 51-hospital system. “Masks, we’re probably a couple of days away” from running out, she said.

To buy time, Providence infection control and quality experts designed prototype face-shields with off-the-shelf materials: marine-grade vinyl, industrial tape, foam and elastic. Monday night they bought supplies at craft stores and Home Depot. On Tuesday, about 20 administrative staff members at the health system’s corporate headquarters volunteered to work an assembly line in a large conference room, putting together 500 home-spun face shields that were going to a hospital in Seattle that night.

Providence plans to get more of the raw materials from wholesale suppliers and resume assembly later this week if it can’t get finished products. Another prototype facemask, made from a surgical wrap material that typically lines surgical trays, is still being tested to see if it meets quality standards.

Authorities should have anticipated the shortfall, said Jennifer Bayersdorfer, Providence’s senior vice president for clinical quality. “I think that they’re behind the eight-ball on this and there was plenty of warning that this going to a problem,” she said.

The shortage of personal protective equipment, or PPE, at the Washington-based medical provider is occuring across the country, as hospitals and doctors scramble to treat thousands of patients who may be infected with the new coronavirus.

Washington state has the second-most known Covid-19 infections in the U.S., with more than 900 diagnosed as of Tuesday evening. It is also the site of a cluster of cases that ripped through a nursing home, killing 30 residents, and alerting the rest of the country to the danger posed by the disease. Providence treated the first case in the United States in a traveler from China in January.

Now that cases are spreading around the country, so are the shortages. Interviews with ten emergency-room doctors and hospital managers around the country tell of colleagues and peers taking extensive measures to conserve fast-dwindling protective equipment, particularly the most potent N95 protective masks, as well as eye protection, gowns and gloves.

“Many ER physicians are taking things into their own hands to find ways to protect themselves,” said Aimee Moulin, an emergency room doctor at UC Davis Medical Center. “They shouldn’t be forced to worry about this. They’re going into battle and they should be armed with whatever they need.”

Some doctors are taking the N95 masks home to wash them with bleach so they can be reused. One hospital ordered protective equipment from a company that supplies goggles and masks to construction workers. One emergency department restitched old surgical masks, where the elastic bands had failed.

“These aren’t normal times,” said Vivian Reyes, an emergency room doctor in San Francisco and president of the California chapter of the American College of Emergency Physicians. “Our supply chain has been stunted. We’re not getting new supplies and our stores are almost depleted.”

The risk of exposure for front-line doctors is worrisome. For instance, in Italy, where doctors are struggling with shortages of protective equipment, 1,700 healthcare workers have been infected with Covid-19, representing about eight percent of that country’s cases, according to the nonprofit Doctors Without Borders.

Many hospitals are unable to order certain medical gear amid a surge in global demand for the equipment. For instance, Kaiser Permanente, which is based in Oakland, Calif., and has 39 hospitals and 23,000 doctors around the country, has gone from screening a few patients a day for Covid-19 to screening hundreds, according to spokesman Marc Brown. As a result, they’re running short on equipment like masks, face shields, and gowns, as well as nasal swabs to test patients for the virus.

Attempts to order more have been unsuccessful, he says. “Incoming shipments of new supplies and equipment we have had on order are now being delayed or cancelled, due to manufacturers’ supply chain challenges and a surge of demand across the global health care industry,” said Brown in a written statement. “We are quickly moving from having adequate supplies to being at risk of running out of some needed equipment and supplies.”

More than half of hospitals had changed practices by the end of February to preserve supplies of protective equipment, including gowns, masks, gloves, shoe covers, and eye shields, according to a survey from Premier Inc., which helps 4,000 member hospitals buy and manage supplies. More than 700 types of protective products were on “allocation,” meaning hospitals only received partial shipments of the supplies they ordered, the company reported March 9.  Hospitals were only getting 44% of the N95 masks they ordered, according to Premier.

The shortage has prompted some groups to call for the federal government to unleash its full reserve of medical supplies contained in the Strategic National Stockpile (SNS), which is controlled by the U.S. Department of Health and Human Services.

But emergency rooms waiting for an influx of gear from the national stockpile may be disappointed. Alex Azar, secretary of HHS, told Congress last month that the stockpile contains 30 million surgical masks and 12 million of the more protective N95 masks. He said there were an additional 5 million N95 masks that may have passed their expiration date.

That number pales in comparison to what could be needed in a serious outbreak. Government scientists in 2015 estimated that a severe flu outbreak infecting 20 to 30 percent of the population would require at least 1.7 billion of the N95 respirators.

The national stockpile used to be somewhat more robust. In 2006, Congress provided supplemental funds to add 104 million N95 masks and 52 million surgical masks in an effort to prepare for a flu pandemic. But after the H1N1 influenza outbreak in 2009, which triggered a nationwide shortage of masks and caused a 2- to 3-year backlog orders for the N95 variety, the stockpile distributed about three-quarters of its inventory and didn’t build back the supply.

Vice President Mike Pence said Tuesday that he and President Trump planned to discuss "the supply chain for hospitals" and he asked construction companies to "donate their inventory of N95 masks to your local hospital and forgo additional orders of those industrial masks."

Additionally, the Defense Department said it will provide 5 million N95 air-filtering masks-- 1 million of them made immediately available-- as well as 2,000 ventilators to help with the response to the novel coronavirus pandemic, according to Secretary of Defense Mark Esper.

“The stockpile can only be a bridge, it can never be the total solution,” said Greg Burel, the former director of the Strategic National Stockpile, who now runs a consulting company focused on emergency and medical preparedness. The stockpile has only received about $600 million per year in appropriations from Congress and that money has to be stretched to cover medicine and supplies for everything from potential anthrax attacks to influenza outbreaks to responses to natural disasters like earthquakes and floods.

The private healthcare sector needs to shoulder a lot of the work to develop these critical stockpiles, says Burel. “What have they done to make sure they’re protecting their nurses and doctors? Have they developed their own stocks?”

At Providence in Washington state, the hospital system is already following relaxed guidelines from federal authorities, which permit staff to wear masks for longer than they ordinarily would to conserve supplies. They’ve been shuttling caches of supplies between their hospitals, moving surplus equipment from Spokane to Seattle in the middle of the night. But now, they fear, inadequate supplies will mean they can’t safely treat suspected Covid-19 patients.

“We truly fear that we’re within a day or two of that at Everett hospital right now,” said Ari Robicsek, the system’s chief medical analytics officer. “What we really need is for industry to be on a wartime footing where factories are required to start churning out this critical equipment.”

— With assistance by Dina Bass