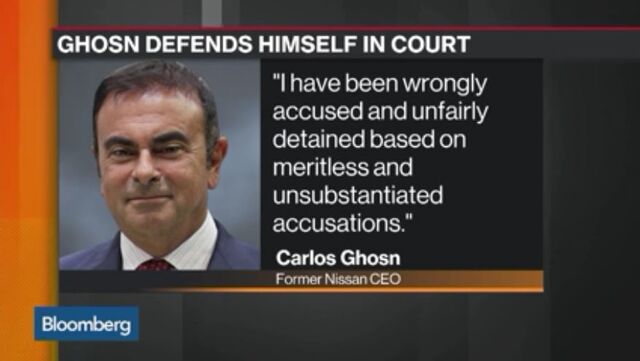 Ghosn Defends Himself in Court Saying He Was 'Wrongly Accused'

Nissan Motor Co. unveiled a new version of its Leaf electric car after delaying its launch amid the shock arrest of former chairman Carlos Ghosn.

The Japanese carmaker called off key events in the wake of the scandal involving Ghosn, who was the architect of Nissan’s electric-car vision and its pact with Renault SA and Mitsubishi Motors Corp., the world’s biggest auto alliance. Ghosn was arrested Nov. 19 in Japan on alleged financial crimes. He remains in a Tokyo prison as prosecutors build their case.

The auto industry’s increasing focus on automation and new-energy vehicles, along with the aggressive push into both areas by Tesla and scores of startups from China to Germany, has added to Nissan’s challenges.

Nissan has sold more than 380,000 Leaf vehicles globally since its model first went on sale in 2010, with over 128,000 in the U.S. The new Leaf will be available at dealerships in Japan starting this month, followed by the U.S., then Europe in mid-2019, Nissan said in a statement.