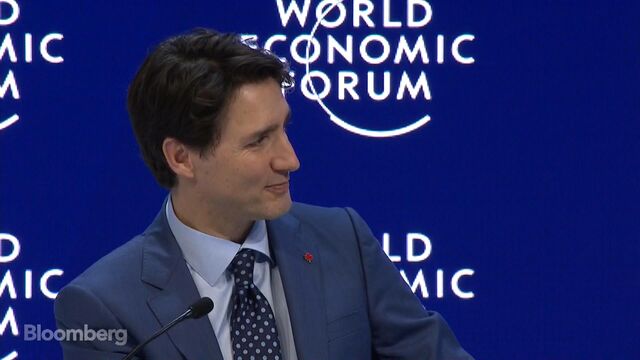 Canadian PM Justin Trudeau on trade and TPP at Davos

The 11 members of a Pacific trade pact abandoned by U.S. President Donald Trump have reached a deal on a revised agreement, with the nations expecting to sign a final deal by early March.

Canadian Prime Minister Justin Trudeau said Tuesday negotiations had concluded on what is now known as the Comprehensive and Progressive Agreement for Trans-Pacific Partnership. The deal was reached after two days of talks in Tokyo, and came just hours after Trump imposed tariffs on imported solar panels and washing machines -- his first major move to level what he says is a global playing field tilted against U.S. companies.

“The agreement reached in Tokyo today is the right deal,” Trudeau said at the World Economic Forum in Davos, Switzerland. “Our government stood up for Canadian interests and this agreement meets our objectives of creating and sustaining growth, prosperity and well-paying middle-class jobs today and for generations to come.”

Senior officials resolved outstanding issues, finalized the list of suspended provisions and completed the legal verification of the agreement. The whole agreement looked like it might collapse after contentious negotiations in November, when Canada’s participation was thrown into doubt.

The agreement comes at a pivotal time for Canada, the second-largest economy in the pact after Trump quit. The country is in the midst of talks to update the North American Free Trade Agreement, the trilateral accord with the U.S. and Mexico that Trump is also threatening to abandon. Part of the Canadian response to U.S. Nafta threats has been to push to expand trade ties elsewhere, including Asia.

Trudeau said he was pleased Canada could make the revised TPP “more progressive and stronger” for workers on intellectual property, culture and the automotive industry. “Trade helps strengthen the middle class, but for it to work we must ensure that the benefits are shared with all our citizens, not just the few,” he said.

Canada has made waves recently in talks with major partners by insisting trade agreements include “progressive” elements such as guarantees for labor, gender, indigenous people and the environment. Trudeau’s position was seen as partly responsible for scuppering the launch of free trade talks with China in December. U.S. officials are opposed to the measures being added to Nafta, which is in the sixth round of negotiations this week in Montreal.

The original Trans Pacific Partnership, which would have covered 40 percent of the global economy, was seen as a guarantee of U.S. involvement in Asia and a counterweight to Chinese clout -- an idea thrown into disarray when Trump withdrew in one of his first acts as president. Japan has led a scramble to keep the deal alive, with the hope of enticing the U.S. to return at a later date.

Of the four remaining issues from the November talks in Vietnam, the sections Brunei and Malaysia had a problem with will be frozen, Japan’s Economy Minister Toshimitsu Motegi said. Matters involving Vietnam’s labor rights and Canada’s cultural goods will be dealt with in side letters, which each country agreed to sign separately to the CPTPP deal, he said.

Canada achieved “a significant outcome on culture and an improved arrangement on autos with Japan along with the suspension of many IP provisions of interest to Canadian stakeholders,” Joe Pickerill, director of communications for Canadian Trade Minister Francois-Philippe Champagne, said Tuesday in an email, referring to intellectual property provisions.

— With assistance by Isabel Reynolds, and Andy Sharp