By
Andrew Dunn
Updated on 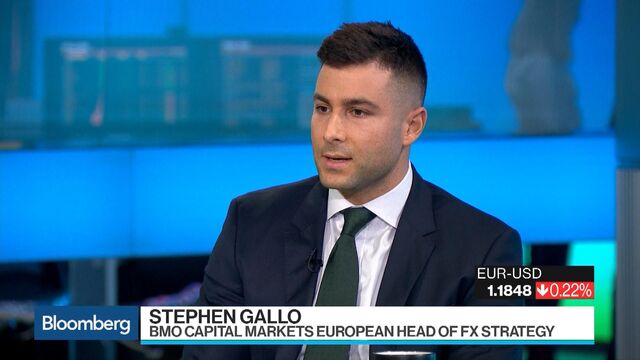 The Catalonia tension will "bend" but not "break" the euro in 2018, Stephen Gallo of BMO Capital Markets says.

The dollar advanced and U.S. equities were mixed in the last trading session before Christmas, while bitcoin plunged at the close of a tumultuous week for cryptocurrencies.

With volume running about 25 percent below average, the S&P 500 Index was little changed as declines in consumer, health-care and financial stocks were countered by real estate and energy. Bitcoin’s slump entered a fourth day, with the digital currency enduring its worst week since January 2015. Chipmakers were among the biggest decliners in the S&P.

Reports showed U.S. consumer spending rose more than forecast in November and an inflation gauge advanced, signs of economic vitality that should keep the Federal Reserve on track to raise rates in 2018. Although Treasuries stabilized, they were set for the biggest weekly loss since September as investors contemplate prospects for continued growth and reduced central bank stimulus.

The Stoxx Europe 600 Index slipped with Spain’s Ibex 35 leading the declines. The country’s bonds also fell along with peripheral European government debt before recovering, while bunds were little changed after a selloff this week drove yields to five-week highs.

West Texas oil wavered between gains and losses as U.S. crude stockpiles dropped to their lowest level in more than two years. Copper and gold rose, and the Bloomberg Commodity Index advanced for the eighth straight day.

Equities in Asia ended largely in the green, with Japan’s Topix Index reaching its highest level since 1991.

These are the main moves in markets: