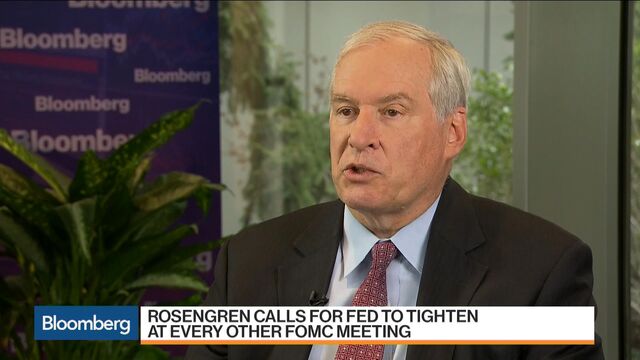 Fed's Rosengren Says Four Hikes May Be Needed in 2017

Two Federal Reserve policy makers discussed the possible need for a faster pace of interest-rate increases than currently mapped out by the U.S. central bank, as the economy progresses toward goals for full employment and 2 percent inflation.

Federal Reserve Bank of Boston President Eric Rosengren argued Wednesday that four hikes in 2017 may be needed to guard against economic overheating, and San Francisco’s John Williams said he “would not rule out more than three increases total for this year.” The median estimate of Fed officials in their mid-March forecasts was for three quarter-point rate increases in 2017.

Both are viewed as potentially persuasive inside the policy-setting Federal Open Market Committee. Rosengren was a long-standing advocate of low rates who shifted his stance late last year, and Williams served as Chair Janet Yellen’s head of research when she ran the San Francisco Fed before moving to the Board of Governors in Washington.

“The economy is in a much better spot,” Rosengren said in an interview with Kathleen Hays on Bloomberg Television. “We’re basically where we want to be, and we don’t want to grow so much faster than potential at this point that we end up getting to an unsustainable unemployment rate that would be reflected either in inflation or in higher asset prices.”

Fed officials have grown more confident in their economic outlook and raised rates earlier this month. Yellen has also noted that only some policy makers’ forecasts factored in the potential fiscal stimulus promised by President Donald Trump.

According to Rosengren, the FOMC should be ready to move again in June, September and December, unless data push the central bank off course.

“We have to raise rates a little bit more quickly to make sure that we don’t overshoot where we want to be,” he said in the interview. “The economy’s likely to be strong enough and growing fast enough that that would be consistent with raising rates roughly every other meeting.”

Rosengren’s comments would place him among five FOMC members, out of 17, who indicated in March that four or more hikes this year would be appropriate in total. He is not an FOMC voter in 2017.

Like he did last year, Rosengren warned that moving too slowly may allow unemployment to undershoot its lowest sustainable level by too much, putting pressure on inflation and creating other points of financial instability.

“It is important to avoid creating an over-hot economy that could require a more rapid tightening of monetary policy -– which would place at risk the economic improvements seen to date,” he said earlier Wednesday in a speech in Boston.

Williams also walked a hawkish line, saying in New York that while the median Fed official expects three increases this year and his “own view is similar,” given his forecast and upside risks he “would not rule out more than three increases total for this year.”

Rosengren may have a difficult time convincing his colleagues to settle into a schedule of raising rates at every other FOMC meeting.

As they grew closer to a tightening cycle in 2014 and began publicly discussing what kind of cadence rate hikes may take, several Fed officials explicitly cautioned investors not to expect a predictable, stair-step approach.

Under Chairman Alan Greenspan the Fed did just that from mid-2004 to mid-2006, raising rates at 17 straight meetings at a so-called “measured pace” of a quarter-point each time. That’s blamed by some economists for partly enabling a massive housing bubble to build during that period.

“I don’t think by any means ‘measured pace’ and the very predictable pace of 25 basis points per meeting explains why we had a financial crisis, but it may have diminished volatility and been a small contributing factor,” Yellen said in September 2014.