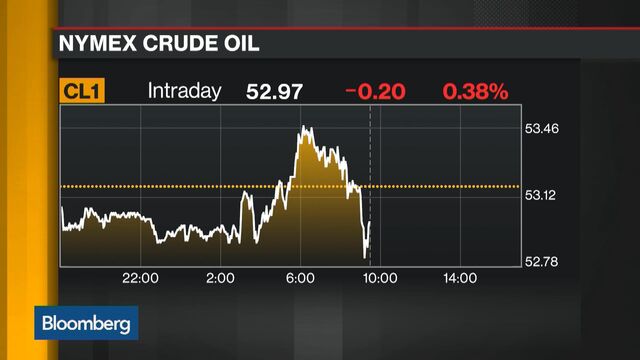 Factoring OPEC Production Cuts in to the Oil Trade

Oil fell a second day after drilling in the U.S. rose to the highest in more than a year, countering OPEC’s efforts to clear a supply glut.

Futures decreased 1 percent in New York. Rigs targeting crude in the U.S. rose last week to the most since November 2015, according to Baker Hughes Inc., while American crude output is at the highest since April, government data shows. Oil supplies from OPEC are sliding this month, according to tanker-tracker Petro-Logistics SA. Declines accelerated as U.S. equities retreated.

Oil has fluctuated above $50 a barrel since 11 nations including Russia last month joined with the Organization of Petroleum Exporting Countries to trim supply. While Saudi Arabia says more than 80 percent of the targeted cuts have been implemented since the deal took effect on Jan. 1, the International Energy Agency predicted a gain in U.S. shale output as prices rise.

"It looks like we are still moving in response to Friday’s rig data," Gene McGillian, manager of market research for Tradition Energy in Stamford, Connecticut, said by telephone. "U.S. crude production is above 8.9 million barrels and rising while the rig count grows. It looks like North American, particularly U.S. production, will eat into the OPEC cuts."

West Texas Intermediate for March delivery fell 54 cents to settle at $52.63 a barrel on the New York Mercantile Exchange. Total volume traded was about 15 percent below the 100-day average. Prices are up 57 percent from a year earlier.

Brent for March settlement, which expires Tuesday, dropped 29 cents, or 0.5 percent, to $55.23 a barrel on the London-based ICE Futures Europe exchange. The global benchmark crude closed at a $2.60 premium to WTI. The more-active April contract slipped 38 cents to $55.32.

Energy companies were the five worst performers on the Standard & Poor’s 500 Index at 3:01 p.m. The S&P Oil & Gas Exploration and Production Select Industry index was down 3 percent.

The number of active oil rigs in the U.S. climbed by 15 to 566 last week, according to data from Baker Hughes on Friday. Explorers have added equipment for eight months, the longest run since September 2014. American crude production is at 8.96 million barrels a day, according to the Energy Information Administration.

Oil price gains will be limited due to the “expected collapse” of the OPEC output agreement and a subsequent rebound in OPEC production in late-2017 and 2018, JPMorgan Chase & Co. senior oil analyst David Martin wrote in an e-mailed report on Friday.

— With assistance by Grant Smith