Biden to Put Tanden in Another Post Should Her Nomination Fa...

Biden to Put Tanden in Another Post Should Her Nomination Fa...

Biden to Put Tanden in Another Post Should Her Nomination Fa...
Politics

The U.S. Senate race is also tight, while the Democratic gubernatorial nominee has a 6-point advantage.
By
John McCormick
,
October 3, 2016, 2:30 PM EDT 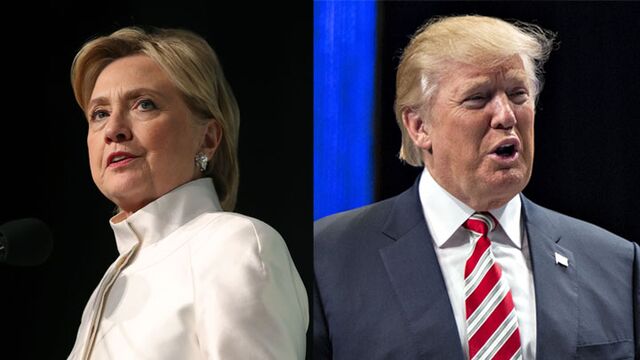 Hillary Clinton and Donald Trump are locked in a close race in North Carolina, a politically and racially polarized battleground where the Democratic presidential nominee is struggling to match the share of black voters President Barack Obama won in 2012.

Clinton has 46 percent and Trump 45 percent in a two-way contest, a Bloomberg Politics poll of the state’s likely voters found, even as Trump is boosted by a 26-point advantage among independents. When third-party candidates are included, Clinton has 44 percent to Trump’s 43 percent.

“It's hard to imagine a battleground state where things could be much closer, both in the overall horse-race number and in the underlying party ideology of the voters,” said pollster J. Ann Selzer, who oversaw the survey. “This is the kind of situation where third-party candidates could tip the balance.”

Read the questions and methodology here.

On an issue that catapulted North Carolina into the national spotlight this year, 52 percent of likely voters say they’d prefer the repeal of a state law that requires people to use bathrooms in government buildings corresponding with the gender listed on their birth certificate, a measure that sparked backlash from transgender advocates.

Libertarian Party nominee Gary Johnson wins 15 percent of those under age 35 in a four-way contest. The Green Party’s Jill Stein won’t appear on the ballot but qualified as a write-in candidate.

The survey, conducted by Iowa-based Selzer & Co., included 805 likely voters. Its margin of error is plus or minus 3.5 percentage points for topline results and is higher for subgroups. It was taken Thursday through Sunday, following Trump’s shaky debate performance and disparaging remarks about a Latina pageant winner’s weight and personal life. On Saturday he was confronted by another challenge as the New York Times reported he may not have paid federal taxes for almost two decades after a nearly $1 billion business loss.

With 15 electoral votes, North Carolina has traditionally leaned Republican in presidential elections. Obama, with a surge of support from black voters, narrowly won the state in 2008 before losing it four years later to Republican Mitt Romney.

Passed in March and signed by McCrory, the so-called bathroom law also took away the power of municipalities to create their own anti-discrimination ordinances, and fallout from the measure has included sporting events and businesses moving to other states. Burr in May said the legislation was “far too expansive” and more recently has been mum on the issue. Burr has called the voter-ID measure, which McCrory also signed, perhaps inconvenient for voters but not discriminatory.

The strongest sentiment for repealing the bathroom law is among Democrats and those who lean that way and among those under age 35, with 74 percent and 72 percent favoring abolishment. Both men and women favor eliminating the law, although men are more divided (47 percent to 42 percent) than women (57 percent to 38 percent).

After clashes between police and protesters in Charlotte and other cities where officers have killed black citizens, Clinton is viewed as better positioned than Trump to help calm tensions. Half of voters pick her, while 38 percent select Trump.

Clinton made her latest visit to the state on Sunday, speaking to black church-goers and a group of young men about topics including police violence. First lady Michelle Obama is headed there on Clinton’s behalf on Tuesday.

Just more than a third of likely voters say North Carolina is headed in the right direction. The issue that dominates for Trump voters is the economy, with 41 percent saying that's the most important matter facing the state right now. For Clinton supporters, three issues are named by at least a fifth of voters each as most important: race relations (24 percent), the economy (23 percent), and laws on accommodations for gay and transgender residents (20 percent).

Among five potential voter concerns about Clinton, the three that test the highest all relate to her time as Obama’s secretary of state: her use of a private e-mail server (57 percent), her handling of the attack in Benghazi (57 percent), and her family foundation's acceptance of foreign government donations (53 percent).

With Trump threatening to bring up Bill Clinton’s marital infidelities during next week’s debate in St. Louis, there doesn’t appear to be much political upside outside of rallying his base, at least in socially conservative North Carolina. Half of likely voters say they aren’t bothered at all by Hillary Clinton’s “handling of allegations of infidelity by her husband during his presidency, which some say allowed him to continue such behavior.”

For Trump, the highest-testing concerns include his criticism of a reporter that was seen as mocking the reporter’s physical disability (56 percent) and his treatment of women (51 percent).