This analysis is by Bloomberg Intelligence analyst Mike McGlone. It appeared first on the Bloomberg Terminal.

Bitcoin could continue doing what it has for most of its nascent existence, appreciating in price on the back of increasing adoption, but at a slower pace as we see it. The first-born crypto has had a tendency to add zeros to its price from around $10 in 2011. It took about four years to go from $1,000 to $10,000 in 2017, so doubling that time frame for maturation could get the price toward $100,000 in about five more years. Or the new technology could fail, but our demand indicators are positive. With the exception of stable coins, the rest of the crypto market is subject to excess supply and competition.

Bitcoin has a history of adding zeros
Bitcoin’s foundation is firming for further price advances, if its history is a guide. Since initially reaching $10,000 in 2017, the benchmark crypto corrected about 70% and remains in an extended period of consolidation around that level. When Bitcoin first traded at $1,000 in 2013, it corrected about 80% and consolidated. About four years after initially reaching $1,000, it added a zero. Considering normal maturation, about double the time frame from $1,000 to $10,000 would come in around 2025, for Bitcoin to potentially add another zero.

Our chart depicts the 260-day annual measure of volatility heading downward. We expect the previous low around 37% in 2016 to eventually be breached as the nascent asset matures. Most demand and adoption measures indicate Bitcoin is more likely to stay on its upward path. 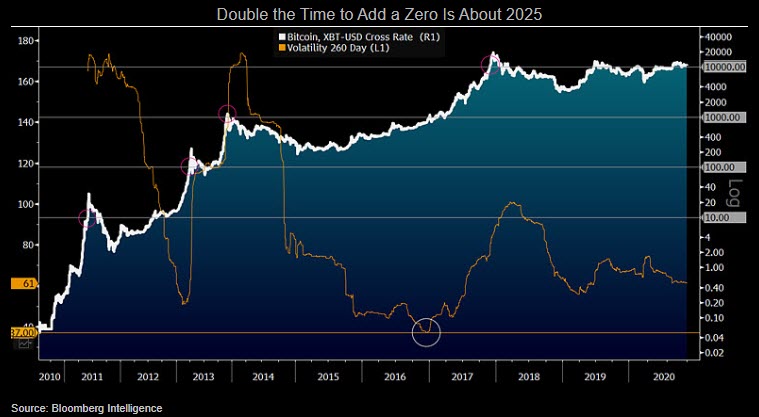 Rising Bitcoin market cap increases demand
A large investment in Bitcoin by MicroStrategy in Q3 may be a mistake, or another iteration in the mainstream adoption of the benchmark crypto. Central banks have been big buyers of gold, absorbing about 20% of annual supply in 2019. The total value of gold is around $9 trillion vs. only about $190 billion for Bitcoin. For comparison, the benchmark crypto is about half the market cap of Tesla. A big difference is higher prices are increasing the supply of Tesla stock. Bitcoin supply is fixed and declining on an annual percentage basis.

At less than $200 billion, the Bitcoin market is too small for many large institutions, including central banks, to add the crypto as part of their holdings, but if the market cap of Bitcoin increases, it becomes increasingly like a digital version of gold. 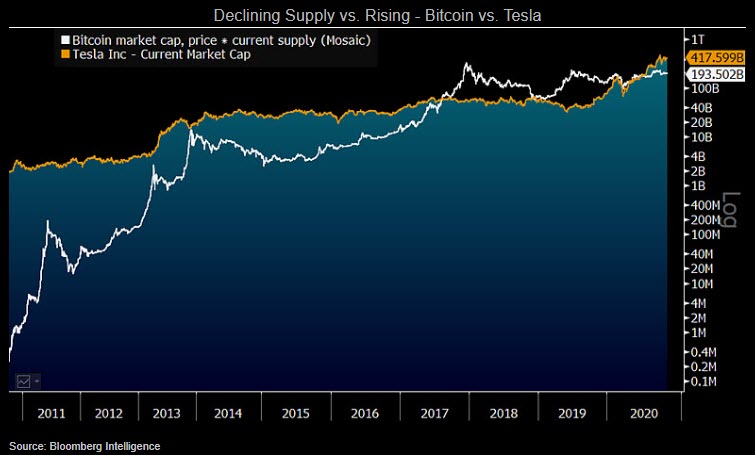 Tether market cap set to pass Ethereum in 2021
The rapid rise in the market cap of stable coins indicates that central bank digital currencies (CBDCs) are a matter of time, in our view. It should take something significant to stall the increasing adoption of Tether, the top stable coin, which is on pace to match the capitalization of Ethereum in a bit less than a year, based on the regression trend since the start of 2019. Our chart depicts the stagnant market cap of Ethereum since 2017 vs. rapidly rising Tether, which jumped to a new high of almost $16 billion at the start of October.

Tether represents what many of the so-called cryptocurrencies aren’t: a stable form of payment. The still-deflating broad crypto-asset bubble from 2017 is migrating assets toward Tether. 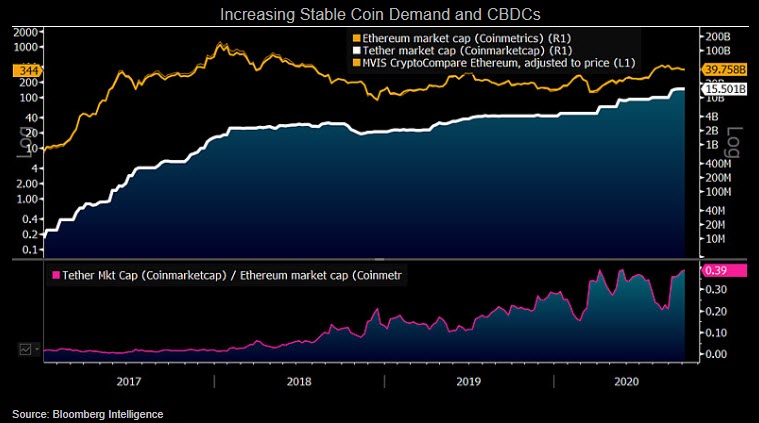 Bitcoin becoming a digital version of gold
The nascent asset is growing up fast and most indicators are positive for Bitcoin adoption and price appreciation. Our graphic depicts rapidly increasing fund-total assets in the Grayscale Bitcoin Trust (GBTC), along with similar upward trajectories in futures open interest and the price of gold. On a 52-week basis, Bitcoin is the most correlated to the metal in our database since 2010. When futures were launched in 2017, the Bitcoin-to-gold relationship was closer to zero vs. about 0.44 now.

Futures were a key initial on-ramp for Bitcoin into the mainstream of asset classes. U.S. exchange-traded funds (ETFs) should be a matter of time, allowing easier access by money managers as gold ETFs did in 2004. The way we see it, something significant needs to go wrong to reverse Bitcoin adoption and price appreciation. 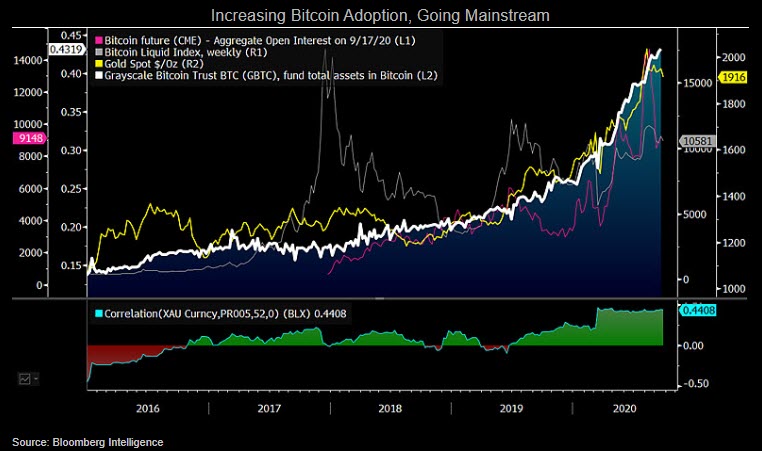 We, and third parties, use cookies and other electronic tools to enhance your experience, analyze site usage, and deliver advertisements tailored to your interests. For more information, please read our Privacy Policy By clicking "Save Settings", you agree to the use of these tools.

These cookies are required to enable core site functionality.

These cookies allow us to analyze site usage so we can measure and improve performance. In order to opt-out, please click on the link(s) below.

Thank you. You can change your settings at anytime using the Cookies Preferences link in the footer of this website.

Thank you. You can change your settings at anytime using the Cookies Preferences link in the footer of this website.

By saving your settings you are agreeing to the use of these tools. You can change your settings at anytime using the Cookies Preferences link in the footer of this website.