What she’s got: High-level executive and management experience from her tenure as head honcho of Hewlett-Packard; private-sector bona fides bolstering her economic message; compelling secretary-to-CEO professional biography; history as a breast cancer survivor, which marks her as tough and relatable to many women; all but certain status as the only female in the GOP field, which allows her both to stand out and to cudgel Hillary Clinton in ways that might seem sexist coming from any non-female rival.

What she lacks: National name recognition; a significant record of public service; a winning record in electoral politics; policy chops on any topic unrelated to job creation and regulation (and substantive detail on those); convincing answers to questions about her ouster from HP; a clear and plausible early-state strategy.

Fiorina talks about the use of HP technology in outer space during her keynote address at the COMDEX computer technology trade show in Las Vegas, on November 18, 2002. Photograph by: David McNew/Getty Images

Fiorina and Gwen Stefani take a selfie during Fiorina’s keynote address at the Consumer Electronics Show in Las Vegas, on January 7, 2005. Photograph by: Justin Sullivan/Getty Images

Fiorina and other technology executives listen as President George W. Bush speaks at the University of Texas at Austin in January 2001. Photograph by: Mark Matson / Bloomberg News/span>

Fiorina and Oprah Winfrey embrace at the National Association of Broadcasters convention in Las Vegas, on April 19, 2004. Photograph by: Bryan Haraway/Bloomberg News

Fiorina speaks into the ear of Colin Powell at a charity dinner hosted by Queen Rania of Jordan on June 22, 2003. Photograph by: JOSEPH BARRAK/AFP/Getty Images

Fiorina works with Fred Davis, a well-known Republican ad maker, on the set of her campaign ad for her California State Senate run. Photograph by: Jonathan Alcorn/FTWP

Fiorina stands with Sheryl Crow, Dr. Dre, Jimmy Iovine, and The Edge of U2 at her keynote address at the 2004 Computer Electronics Show. Photograph by: Lee Celano/WireImage

Mark Halperin: Carly Fiorina Is The Most Improved Candidate

Mark Halperin and John Heilemann question why despite Carly Fiorina’s strong announcement for the Republican presidential nomination she hasn’t mentioned a single specific idea in her campaign. 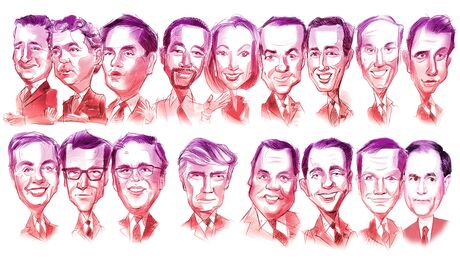 A Mnemonic Acronym for 17 Republicans 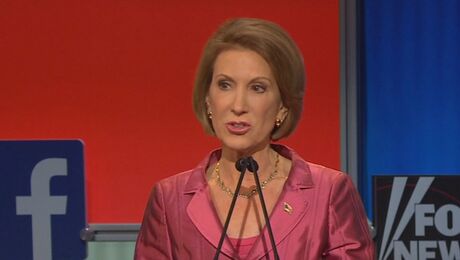 “Politics is a facts-free zone.”

“They’re not entrepreneurial. They don’t innovate—that’s why they’re stealing our intellectual property.”

“Oh Katie, would you ask a male candidate that question?”

- in response to Couric’s question of whether she is “running” for vice president.

“I was fired in a boardroom brawl.”

- on her departure from Hewlett-Packard.

“I think leadership of any kind requires trust and transparency and voters should demand no less from their political leadership in government.”

- after disclosing her tax information.

Fiorina is a breast cancer survivor.