May’s Brexit Deal Is a Betrayal of Britain

If the U.K. parliament supports her plan, it will never be forgiven. 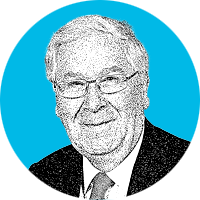 When Tony Blair and Boris Johnson unite in their condemnation of the “deal” under which Theresa May proposes that the U.K. should leave the EU, you know something has gone badly wrong. The withdrawal agreement is less a carefully crafted diplomatic compromise and more the result of incompetence of a high order. I have friends who are passionate Remainers and others who are passionate Leavers. None of them believe this deal makes any sense. It is time to think again, and the first step is to reject a deal that is the worst of all worlds.

There have been three episodes in modern history when the British political class let down the rest of the country: in the 1930s, with appeasement; in the 1970s, when the British economy was the “sick man” of Europe and the government saw its role as managing decline; and now, in the turmoil that has followed the Brexit referendum. In all three cases, the conventional wisdom of the day was wrong.