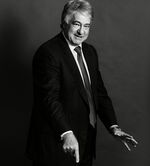 The private equity CEO with a fearsome reputation skates on the edges of other people’s catastrophes and manages to walk away richer.

Leon Black, the most feared man in the most aggressive realm of finance, wants you to know he’s misunderstood. Not about the feared part—that much is indisputable.

Black built his company, Apollo Global Management Inc., by buying struggling businesses with huge piles of debt at bargain-basement prices, imposing austerity measures on the staff, and extracting huge dividend payments and management fees. Many of Apollo’s most lucrative deals have been from companies other firms wouldn’t go near, and Black is concerned this has left him with a reputation for taking on inordinate risk. “We’ve actually made our most money during recessions,” he says, growing agitated. As his face reddens over his blue Hermès tie, his incongruously soft voice rises by an octave, and he stabs a pile of printed-out emails with an eraserless No. 2 pencil. “Everybody else is running for the doors, and we’re backing up the trucks.”