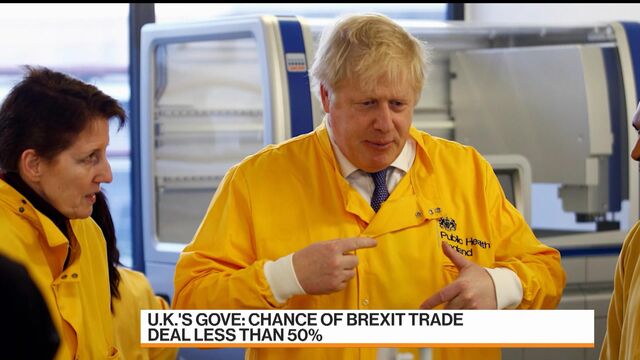 Brexit Deal Is Not All About the Fish

The European Union’s chief Brexit negotiator, Michel Barnier, warned British Prime Minister Boris Johnson that he will have to accept limits on access to the single market in return for greater control over fishing -- or face no deal.

After his British counterpart issued a statement on Thursday night describing the talks as “blocked,” Barnier said a deal could be struck if both sides make “a real effort.”

But, in a speech to the European Parliament on Friday, he gave a stark assessment of the ultimatum the EU is giving to the British: access to the EU’s single market will be conditional on keeping British fishing waters open to boats from the bloc.

That puts him on collision course with Johnson, who said on Thursday the negotiations will fail unless the EU softens what he called its “not reasonable” stance on fish.

“If the U.K. wants to cut access to these waters for European fishermen, at any given time, then the EU also has to maintain its sovereign right to react or to compensate by adjusting the conditions for products, and notably fisheries products, to the single market,” Barnier said.

The fishing industry has a minimal economic impact -- it accounts for just 0.1% of U.K. gross domestic product -- but is of high political significance, with Johnson’s government seeing it as a symbol of national sovereignty.

By linking fishing to trade, the EU is betting that the U.K. will grant European boats better access to its waters in return for being able to do business with the bloc in other areas.

“We’re at the moment of truth,” Barnier told the European Parliament. “We have very few hours left if we want an agreement.”

Amid the rhetoric, officials in Brussels expressed confidence that a deal could still be struck before next week. Behind the scenes, the talks are progressing, and such negative language is to be expected at this stage, both as a negotiating tactic and to manage expectations at home, they said. The discussions are continuing and, by Friday morning, Johnson had softened his rhetoric.

“Our door is open, we’ll keep talking,” he said in a pooled TV interview. “We hope that our EU friends will see sense and come to the table with something themselves.”

Dozens of officials from both sides are in Brussels, ready to finalize an agreement over the next 48 hours. Talks between Barnier and his British counterpart, David Frost, restarted shortly around 3 p.m. after the Frenchman and his team consulted with national capitals on how far they are willing to compromise on fishing.

On Thursday, the U.K. rejected the EU’s latest offer: that the bloc would give up about 23% of the fish it catches in British waters after a transition period of seven years, the people said. This marked movement on the European side -- it had previously offered to cede up to 18% after a 10-year transition period -- but is still far from the British demand of 60% after three years.

The other major obstacle is the level competitive playing field for business. For months it looked like this was what could break the negotiations and while the issue isn’t completely resolved, the two sides are much closer to a solution, according to officials on both sides.

For some weeks, the U.K. has objected to the EU’s plan to exempt central bloc financing, including its 750 billion-euro ($920 billion) pandemic relief package, from any restrictions on state aid, according to a British official.

In a call with European Commission President Ursula von der Leyen on Thursday, Johnson said the U.K. was “making every effort to accommodate reasonable EU requests on the level playing field, but even though the gap had narrowed, some fundamental areas remained difficult.”

Johnson said that the EU’s position on fisheries was “simply not reasonable and if there was to be an agreement it needed to shift significantly,” according to a statement from his office. “The U.K. could not accept a situation where it was the only sovereign country in the world not to be able to control access to its own waters for an extended period.”

— With assistance by Dara Doyle, and Joe Mayes

(Adds Frost-Barnier talks restarting in 11th paragraph.)
Published on December 17, 2020, 4:38 PM EST
Updated on December 18, 2020, 9:44 AM EST
Have a confidential tip for our reporters?
GET IN TOUCH
Before it's here, it's on the Bloomberg Terminal.
LEARN MORE