Trump Says He Will Quarantine After Aide Falls Ill With Virus 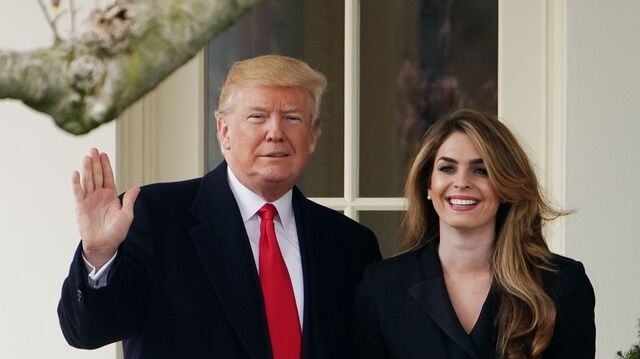 President Donald Trump said that he would begin self-quarantine while waiting for coronavirus test results after Hope Hicks, one of his closest aides, tested positive for Covid-19.

“She did test positive. I just heard about this,” Trump said in an interview Thursday night on Fox News, about two hours after Bloomberg News first reported Hicks’s positive test.

Later, in a tweet, the president said that he and First Lady Melania Trump had been tested for the virus and were waiting on the results. “In the meantime, we will begin our quarantine process!”

It was unclear from the president’s tweet whether that meant he planned to halt campaigning for re-election. An official White House schedule released less than an hour earlier still listed his plans to meet with supporters in Washington on Friday, then fly to Florida for a campaign rally near Orlando.

Hicks traveled with Trump aboard Air Force One to and from the presidential debate in Cleveland on Tuesday and to a Minnesota rally on Wednesday. She felt poorly in Minnesota and quarantined aboard the presidential plane on the way home, according to people familiar with the matter.

The people asked not to be identified because Hicks’s infection had not been publicly announced until Trump’s interview. Messages left for Hicks were not immediately returned.

“I’ll get my test back either tonight or tomorrow morning,” Trump said. He said he “was surprised” about Hicks’s infection, remarking that she often wears a mask. “She is a very warm person,” he said.

He suggested that members of the military or law enforcement might pose a risk of infection to White House staff, including himself.

“It’s a tough kind of a situation. It’s a terrible thing,” he said.

More from Election
Cheney’s Grip on GOP Job Weakens as Leadership Turns Against Her
Trump Remains Banned on Facebook, Oversight Board Rules
The Battle for Control of Georgia’s GOP Shows the Power of Trump’s Grip
Trump Sets Up Website Presence a Day Ahead of Facebook Decision

He added later in the interview that “people from the military or from law enforcement” approach him and his staff and “want to hug you and they want to kiss you because we really have done a good job for them.”

“You get close and things happen,” he said.

Hicks is the latest person in Trump’s orbit to contract the virus, which has infected more than 7.2 million Americans and killed more than 200,000. Other senior staff have contracted Covid-19 and recovered including National Security Adviser Robert O’Brien, but few spend as much time with the president as Hicks, whose service dates to his 2016 campaign.

Some people close to Hicks were told that she is experiencing symptoms of the disease.

“The president takes the health and safety of himself and everyone who works in support of him and the American people very seriously,” White House spokesman Judd Deere said in a statement. “White House Operations collaborates with the physician to the president and the White House Military Office to ensure all plans and procedures incorporate current CDC guidance and best practices for limiting Covid-19 exposure to the greatest extent possible, both on complex and when the president is traveling.”

The development is likely to inflame criticism of the Trump administration’s response to the coronavirus pandemic, as well as the president’s disregard for public health measures to combat it.

Trump seldom wears a mask and has belittled his re-election challenger, Joe Biden, for routinely covering his face. The president has resumed holding large campaign rallies at which thousands of his supporters gather, shoulder to shoulder, few in masks.

Most of the events are held outdoors at airports but two recent events in Arizona and Nevada were indoors, a setting that public health experts warn raises the risk of virus transmission.

At the debate in Cleveland, Trump’s entourage entered the debate hall without face coverings -- or removed them as they sat down -- and refused an offer of masks from a doctor at the Cleveland Clinic, which was co-hosting the event. Hicks was not seen in the debate hall.

When they returned to Washington on Tuesday, Stephen Miller and Hicks were seen sharing an umbrella as they exited Air Force One in the rain. Miller’s wife, Katie Miller -- Vice President Mike Pence’s press secretary -- recovered from Covid-19 earlier this year.

After feeling ill in Minnesota, Hicks tested positive for the virus on Thursday.

Trump is tested regularly, though it is not clear precisely how often. People who work in the White House are tested daily, including members of the press corps, and anyone scheduled to meet with the president is tested beforehand.

Trump’s staff wear masks when traveling with him aboard the presidential helicopter, Marine One, and Hicks observed that protocol this week.

But his aides worry that Trump’s lack of sleep during the final stretch of the presidential campaign could leave him especially vulnerable to infection. The president did not return to the White House until after midnight following his Tuesday and Wednesday trips. The president’s age, 74, also puts him at greater risk for serious illness from the virus.

A person familiar with the debate commission’s testing protocols said there should have been no co-mingling between the Trump and Biden campaign staff in Cleveland, and that there were separate entrances and rooms for both groups. The person added that everyone in the debate hall had to be tested 72 hours before the event, and everyone traveling with Biden and top people in his campaign had to be certified by medical personnel that they had tested negative for the virus.

— With assistance by Tyler Pager