Amazon Drivers Are Hanging Smartphones in Trees to Get More Work

Amazon Drivers Are Hanging Smartphones in Trees to Get More Work 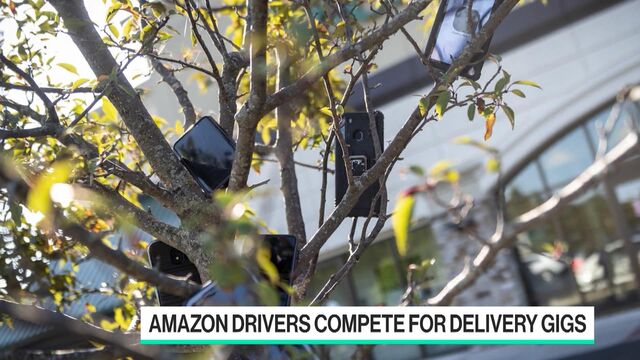 Amazon Drivers Put Phones in Trees to Get More Work

A strange phenomenon has emerged near Amazon.com Inc. delivery stations and Whole Foods stores in the Chicago suburbs: smartphones dangling from trees. Contract delivery drivers are putting them there to get a jump on rivals seeking orders, according to people familiar with the matter.

Someone places several devices in a tree located close to the station where deliveries originate. Drivers in on the plot then sync their own phones with the ones in the tree and wait nearby for an order pickup. The reason for the odd placement, according to experts and people with direct knowledge of Amazon’s operations, is to take advantage of the handsets’ proximity to the station, combined with software that constantly monitors Amazon’s dispatch network, to get a split-second jump on competing drivers.

That drivers resort to such extreme methods is emblematic of the ferocious competition for work in a pandemic-ravaged U.S. economy suffering from double-digit unemployment. Much the way milliseconds can mean millions to hedge funds using robotraders, a smartphone perched in a tree can be the key to getting a $15 delivery route before someone else.

Drivers have been posting photos and videos on social-media chat rooms to try to figure out what technology is being used to receive orders faster than those lacking the advantage. Some have complained to Amazon that unscrupulous drivers have found a way to rig the company’s delivery dispatch system.

In an internal email seen by Bloomberg, Amazon said it would investigate the matter but would be unable to divulge the outcome of its inquiry to delivery drivers. The company, through a spokeswoman, declined to comment.

Bloomberg reviewed photos and video of smartphones in trees outside Whole Foods and Amazon delivery stations. They show drivers approaching the phones and syncing them with their own devices, then sitting or standing nearby waiting for an alert about a route.

An Uber-like app called Amazon Flex lets drivers make deliveries in their own cars. For many with other jobs, it’s a way to earn extra money in their spare time. But with joblessness rising and unemployment payments shrinking, competition for such work has stiffened, and more people rely on it as their primary income source. Adding to the pressure, fewer people are using ride-hailing services like Uber and Lyft, so more drivers have to deliver online shopping orders to make money. As a result, some Whole Foods locations have come to resemble parking lots at Home Depot Inc., where day laborers have long congregated to pick up home repair gigs.

Unlike hourly employees who get paid even when work is slow, gig workers only get paid by the job. So securing a route through the smartphone app is the key first step to making money. Most Flex routes last from two to four hours and can be scheduled in advance. That system can be gamed as well. Drivers download apps on their smartphones that constantly monitor the Amazon Flex site and automatically take any routes that become available, as CNBC reported in February. Bloomberg reported similar use of apps by Instacart shoppers earlier this month.

What’s happening at Whole Foods in the Chicago area is different. Drivers are competing for fast-delivery Instant Offers, which require an immediate response and typically take between 15 and 45 minutes to complete. Instant Offers are dispatched by an automated system that detects which drivers are nearby through their smartphones, according to two people familiar with the technology. When drivers see an Instant Offer, they have only a few minutes to accept the delivery or lose it to someone else.

In an urban area with good cell tower coverage and plentiful WiFi hotspots, the system can detect a smartphone’s location to within about 20 feet, one of the people said. That means a phone in a tree outside Whole Foods’ door would get the delivery offer even before drivers sitting in their cars just a block away.

The phones in trees seem to serve as master devices that dispatch routes to multiple nearby drivers in on the plot, according to drivers who have observed the process. They believe an unidentified person or entity is acting as an intermediary between Amazon and the drivers and charging drivers to secure more routes, which is against Amazon’s policies.

The perpetrators likely dangle multiple phones in the trees to spread the work around to multiple Amazon Flex accounts and avoid detection by Amazon, said Chetan Sharma, a wireless industry consultant. If all the routes were fed through one device, it would be easy for Amazon to detect, he said.

“They’re gaming the system in a way that makes it harder for Amazon to figure it out,” Sharma said. “They’re just a step ahead of Amazon’s algorithm and its developers.”

One reason Flex contractors do this is to get around the requirements for being a driver, such as having a valid license or being authorized to work in the U.S., according to a person familiar with the matter. In such cases, someone who meets the requirements downloads the Flex app and is offered a route earning $18 an hour. He or she accepts the route and then pays someone else $10 an hour to do it, said the person, who requested anonymity to discuss a private matter.

A Flex driver who has been monitoring the activity said the company needs to take steps to make sure all drivers are treated fairly.

“Amazon knows about it,” the driver said, “but does nothing.”