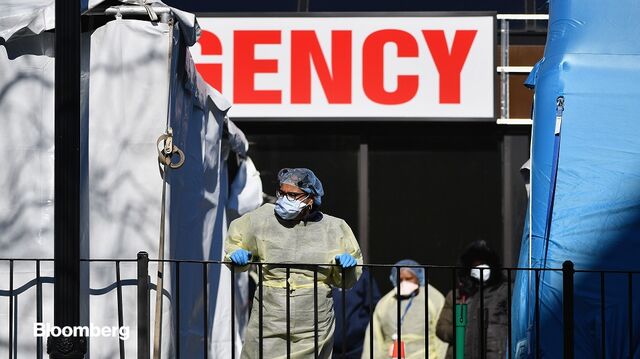 N.Y Death Toll Reaches 385; Some Patients on Ventilators up to 30 Days

New York officials are talking to a wide range of Manhattan hotel owners as they muster resources to deal with the coronavirus.

They’re assessing the viability of various Midtown properties for everything from housing emergency responders to providing medical care as the number of cases surges in New York City.

With New York City and its suburbs now the epicenter of the outbreak in the U.S., local officials are looking for thousands of rooms. Governor Andrew Cuomo said in a tweet on Thursday that three hotels, including the St. Regis, were offering facilities for “non-critical” patients, while two others will offer rooms to medical workers.

The state wants to work with owners of larger properties, said Vijay Dardapani, chief executive officer of the Hotel Association of New York City. The trade group gave government officials a list of 15 hotels, each with roughly 500 rooms or more, and expects that as many as 10,000 rooms could be adopted for a variety of uses.

The owner of the Four Seasons on 57th Street said Wednesday he would give doctors and nurses free housing at the luxury hotel, where rooms typically go for as much as $6,500 a night.

“Almost everyone is ready to do it,” Dardapani said.

With travel virtually shut down across the U.S., hotels have emptied out as business trips are scrapped and vacations are put on hold. The lodging industry has been particularly hard hit in New York, San Francisco and Boston, major cities that have been battered by the outbreak.

Still, hotel properties are a potential resource for local governments. Earlier this month, officials in Washington state used emergency powers to acquire an Econo Lodge outside Seattle to house people who were infected with the virus but not seriously ill, part of an effort to keep hospital beds available for people who need them.

New York announced on Thursday that it is looking for temporary hospital sites with the goal of adding a 1,000-plus patient overflow facility in each of the five borough as well as Westchester, Rockland, Nassau and Suffolk counties.

The owner of one large New York hotel said that based on his conversations with Cuomo’s office, hotels are not ideally suited for use as intensive care units, but could work for patients with less acute conditions. The state is assessing virtually every hotel in Manhattan, said the owner, who asked not to be named because the matter was private.

Housing doctors and nurses is much easier. Earlier this week, a hotel trade group identified 6,500 U.S. hotels that could be used for emergency responders.

Billionaire Ty Warner, best known as the maker of Beanie Babies, said in a statement on Wednesday that he volunteered his property near Central Park after hearing Cuomo speak at a recent press briefing. Warner, founder and chairman of Ty Warner Hotels and Resorts, is offering the 330-room hotel, designed by I.M. Pei, to the state free of charge.

The hotel closed Friday, and is not taking reservations until April 15. Government officials, medical groups and the hotel’s management were working out details like how to staff the hotel, what types of sanitary guidelines to follow, and who will stay at the property.

“If he could wave a magic wand, it would have happened already,” Greg Scandaglia, an attorney who represents Warner, said in an interview Wednesday.

(Updates with tweet from Andrew Cuomo.)
Have a confidential tip for our reporters?
GET IN TOUCH
Before it's here, it's on the Bloomberg Terminal.
LEARN MORE
;