Newest Shortage in New York: The City Is Running Out of Dogs to Foster

By
Bailey Lipschultz
and
David R Baker
Updated on

Newest Shortage in New York: The City Is Running Out of Dogs to Foster 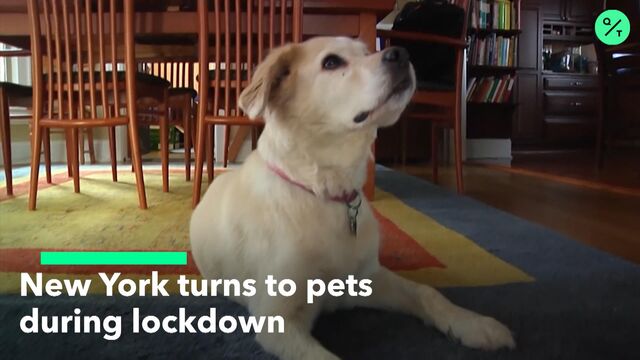 Of all the shortages created by the coronavirus pandemic -- the toilet paper and the hand sanitizer and the bottled water -- the oddest of them all has to be dogs. Oh, and cats too.

That’s right, in the New York city area, the epicenter of the disease, there is suddenly a run on pets. At least of the adopted or fostered kind. Muddy Paws Rescue and Best Friends Animal Society are reporting shelters they work with are either all out of or almost out of cats and dogs after a surge in applications of as much as 10-fold in the past two weeks.

Ordered to shelter in place at home, and both a little bored and a lot anxious, New Yorkers apparently see the four-legged friends as way to calm frayed nerves. “For the moment we definitely don’t have any dogs left to match” with foster volunteers, said Anna Lai, the marketing director at Muddy Paws. “Which is a great problem to have.”

It also helps explain why shares of Chewy Inc. are soaring right now even as the stock market overall crashes. It’s up 7% this year, as customers hunker down and order online. The spike in volume has pushed delivery times to between seven and 10 days for most customers, according to the company’s website.

Other pet-centered companies are outperforming, too. PetMed Express Inc. an animal pharmaceutical company is up more than 7%, while Freshpet Inc. shares are down 2.3% compared to the S&P 500 Index’s 23% decline.

The run on pets seems to extend beyond New York, at least in disease hotspots. The American Society for the Prevention of Cruelty to Animals said its Los Angeles office saw a 70% increase in animals going into foster care. And Best Friends said many of the shelters it partners with across the U.S. report the same phenomenon.

While the pickings are slim now, rescue organizations worry they’ll soon see the opposite problem -- a rise in surrendered pets as many Americans lose their jobs. Shelters may be asked to take in more animals than they have room to house.

“We’re doing whatever we can to empty all of our shelter facilities,” said Lisa LaFontaine, chief executive officer of the Humane Rescue Alliance, which has adoption centers in the District of Columbia and New Jersey. “We don’t know what’s going to happen when the economic wave starts hitting.”

Meanwhile, in Washington, D.C., Tom Drescher and his wife, Becky Nolin, are settling in with Goldie, a 10-year-old mixed breed they found at an adoption site online and brought home on Friday. The dog’s age and health issues, including cancer, only inspired them more to provide a home.

“It occurred to us it would be a good time to adopt a dog because we’d have the time and bandwidth to help it settle in,” said Drescher, 35. “It’s been a blast for us so far -- we’ve been thrilled to have her.”

(Updates stock prices of pet suppliers in 4th paragraph. An earlier version corrected, in 3rd paragraph from end, where Humane Rescue Alliance operates.)
Published on
Updated on
Have a confidential tip for our reporters?
GET IN TOUCH
Before it's here, it's on the Bloomberg Terminal.
LEARN MORE