By
Piotr Skolimowski
Updated on 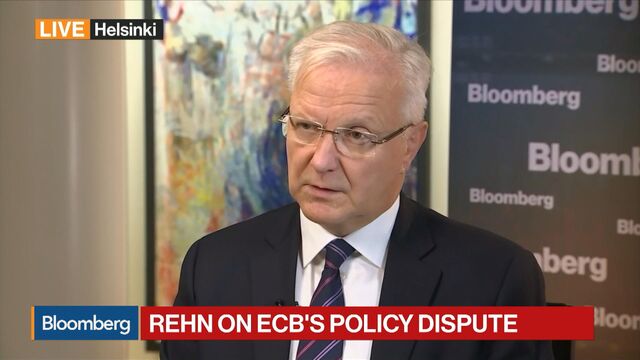 Explore what’s moving the global economy in the new season of the Stephanomics podcast. Subscribe via Pocket Cast or iTunes.

European Central Bank officials were far apart on the elements of the monetary stimulus package that led to public acrimony after last month’s decision.

The account of the Sept. 11-12 meeting showed some members of the Governing Council were ready to back an even deeper cut in interest rates in exchange for dropping the proposal to restart bond purchases. Others needed convincing about reducing rates at all because of concern about the possibility of increasingly adverse effects.

“A number of reservations were expressed about individual elements of the proposed policy package,” the ECB said in the account of the session. “Although the rational for a comprehensive package was widely shared, members assessed the case for specific elements differently, with some measures seen as substitutes rather than complements.”

The meeting was one of the most contentious in President Mario Draghi’s eight-year term, with about a third of the 25-member Governing Council opposing the decision to resume quantitative easing. The central-bank staff who prepare for the meeting had earlier recommended against QE.

The difference of opinion was extensive -- from the assessment of the economic outlook to effectiveness of particular tools and the scale of the action, the account showed. It even extended to the wording on when the ECB will be willing to consider a rate hike.

The Governing Council went through a number of iterations of that guidance before agreeing to effectively keep the package in place until inflation is firmly tethered around its inflation goal of just under 2%, which forecasters don’t see as likely until at least 2021.

The wording could become a battleground again if the ECB decides to start a review of its policy framework, one that Finnish central banker Olli Rehn has long argued for and next President Christine Lagarde appears keen to pursue.

“All in all, the adopted formulation on state-dependent forward guidance was viewed as remaining consistent with the ECB’s current monetary policy strategy, as it neither redefined the policy aim nor pre-empted a strategy review that might take place later,” the document said.

The ECB said there was a “clear majority” in favor of restarting QE, though “a number of members” saw the case as “not sufficiently strong.” A remark was made that open-ended bond-buying could lead to expectations for a faster pace that “would exhaust the purchasable universe and call into question the program limits.”

The decision was made to put off the discussion about the ECB’s self-imposed constraints on QE, designed to prevent illegal monetary financing of governments, until they “became more pressing.”

The cut in the deposit rate to a record-low minus 0.5% was passed by a “very large majority.” In the opening presentation, Executive Board member Benoit Coeure, who heads market operations, said investor “conviction about cuts significantly deeper into negative territory was not broad-based.”

After the meeting, Dutch governor Klaas Knot took the unprecedented step of announcing his dissent in a statement, describing the decision as disproportionate to the economic situation, and governors from Germany, Austria and France aired their grievances in interviews. Executive Board member Sabine Lautenschlaeger, who had also voiced her opposition to bond purchases, resigned without publicly giving an explanation.

Draghi responded by warning that discord could undermine the effectiveness of monetary policy. Bundesbank President Jens Weidmann, consistently one of the most vocal critics of QE, then used a speech last week to hit back at what he saw as an attempt to silence the stimulus debate.

The split has cast a pall over Draghi’s final weeks before his Oct. 31 departure, and put his successor under pressure to mend fences as the euro zone battles a worsening slowdown. Global trade tensions remained heightened, and the prospect of a no-deal Brexit -- possibly also on Oct. 31 -- has risen. Investor sentiment in the currency bloc fell to the lowest level in more than six years in October and a manufacturing recession in Germany, the biggest economy, is starting to hit demand.

In a rare sign of agreement at the otherwise fractious meeting, all members agreed that there was an urgent need for governments with fiscal space to step in and boost spending “in an effective and timely manner,” the account showed.

(Updates with comments on forward guidance from sixth paragraph.)
Published on
Updated on
Have a confidential tip for our reporters?
GET IN TOUCH
Before it's here, it's on the Bloomberg Terminal.
LEARN MORE