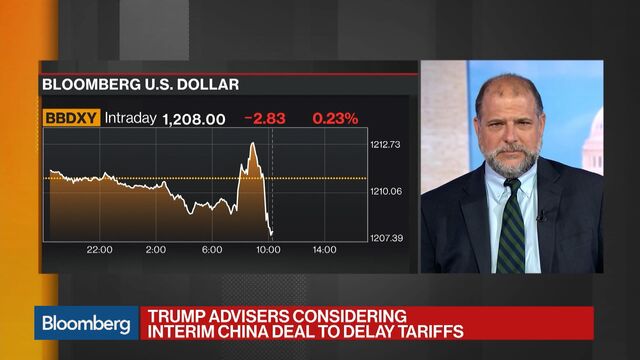 Trump administration officials have discussed offering a limited trade agreement to China that would delay and even roll back some U.S. tariffs for the first time in exchange for Chinese commitments on intellectual property and agricultural purchases, according to five people familiar with the matter.

Some of President Donald Trump’s top trade advisers in recent days have discussed the plan in preparation for two rounds of face-to-face negotiations with Chinese officials in Washington, due to take place in coming weeks, the people said.

The discussions are preliminary and Trump has yet to sign off on it. The president told reporters, in response to a question about the potential for a limited agreement, that he would be open to an interim deal -- but would prefer a lasting one.

“A lot of people are talking about, and I see a lot of analysts are saying: an interim deal, meaning we’ll do pieces of it, the easy ones first,” Trump said late Thursday. “But there’s no easy or hard. There’s a deal or there’s not a deal. But it’s something we would consider.”

Asian stocks saw modest gains Friday. Shares in Japan, Australia and Hong Kong pushed higher, with markets in China and South Korea closed for a holiday. The S&P 500 rose to just under its all-time high Thursday after the report.

The proposal would freeze the conflict rather than bring a final resolution to a trade war that has cast a shadow over the global economy. U.S. equities and Asian stock futures advanced after news of the discussions.

The plan reflects concerns within the White House over the recent escalation in tariffs and their economic impact on the U.S. going into an election year. Polls show the trade war is not popular with many voters and farmers are increasingly angry over depressed commodity prices.

One of the main goals is to strike a deal that would allow the administration to avoid going ahead with more tariffs in December that would hit consumer products ranging from smart-phones to toys and laptop computers. Also in play is a further delay in a tariff-rate hike due to take effect in October.

Late Wednesday, Trump tweeted that he was putting off the 5% increase in tariffs on Chinese goods, originally set to take effect the first day of next month until Oct. 15 -- out of respect for the celebration of the 70th anniversary on Oct. 1 of the founding of the People’s Republic of China.

The office of U.S. Trade Representative Robert Lighthizer did not respond to multiple requests for comment. The Treasury Department didn’t respond to a request for comment.

Exact details of a possible deal, like what specific commodities and how much China will buy and when, still need to be worked out. But the idea is that the deal would include IP commitments that China had agreed to in negotiations in the spring before talks broke down, leading to a summer of escalation.

When those talks fell apart in May the two sides were circulating a 150-page draft agreement and White House officials have repeatedly said they were 90% of the way to securing a deal.

China has insisted throughout the negotiations that any deal would have to see a withdrawal of U.S. tariffs.

It’s not clear if special licenses for Huawei Technologies Co. will be part of the deal, two of the people said, citing congressional worries over national security issues related to the Chinese company. China has made clear throughout the negotiations that it wants the U.S. to remove the company from its export blacklist and denies claims that Huawei was spying for the Chinese government.

Working-level trade teams from the U.S. and China will meet next week, Xinhua reported Thursday, citing Chinese Vice Premier Liu He. Lighthizer and Treasury Secretary Steven Mnuchin are scheduled to sit down with Liu in early October.

Some signs of goodwill have emerged ahead of the talks. The Chinese government is considering whether to permit renewed imports of American farm goods including soybeans and pork, Bloomberg reported Wednesday.

Trump on Thursday said on Twitter that he “expected that China will be buying large amounts of our agricultural products!”

If a deal like the one being contemplated comes to fruition during the face-to-face meetings coming up, it could lead to a hold on further U.S. tariffs and an eventual removal of 15% tariffs on $112 billion in Chinese goods that went into effect on Sept. 1.

That would return the status of U.S. tariffs to about $250 billion in Chinese goods and mark the first time the Trump administration has reduced tariffs on China since they were introduced last year.

The discussions come amid growing evidence that the Chinese, U.S. and global economies are feeling the negative effects of the dispute. Manufacturing sectors around the world have gone into contraction in recent months. There are also signs that the manufacturing jobs gains that Trump has built his case for re-election on are going into reverse in some key industrial swing states.

Trump has insisted publicly that the U.S. is winning his trade war and that he has no choice but to take on a China that for decades has swallowed up whole industries and been blamed for a cratering in manufacturing jobs since it joined the World Trade Organization in 2001.

The administration could face challenges selling a limited agreement on Capitol Hill that doesn’t address all structural issues, especially as concerns grow in Washington about the possibility of a harsh crackdown on pro-democracy protests in Hong Kong.

“It will be absolutely eviscerated both up on the Hill, especially in light of what is happening in Hong Kong and what is likely to be a pretty nationalistic celebration on Oct. 1,” said Jude Blanchette, chair of China studies at the Center for Strategic and International Studies in Washington.

Behind the scenes some Trump advisers have grown increasingly nervous about the direction of the economy going into the 2020 election. While he has insisted that the U.S. economy is strong, Trump has also called increasingly loudly for the Federal Reserve to take what would normally amount to emergency measures to boost growth.

In a sign of his concern on Wednesday, Trump called for the Fed to follow the path taken by the European Central Bank and to reduce interest rates “down to ZERO, or less” and to use that to refinance the U.S.’s sovereign debt.

China, meanwhile, has been pursuing its own efforts to mitigate the damage of the trade wars.

Beijing this week lifted long-standing quotas on foreign investment in its stock and bond markets. It also announced Wednesday that it would exempt some U.S. products from the tariffs it has imposed over the past year.

The process to exempt certain imports from the duties was aimed mainly at domestic constituencies in China. It is the equivalent of a U.S. mechanism to grant exclusions to U.S. importers for certain Chinese products. Trump on Wednesday nevertheless called the move “a gesture” and said China “did the right thing.”

(Adds markets in fifth paragraph.)
Have a confidential tip for our reporters?
GET IN TOUCH
Before it's here, it's on the Bloomberg Terminal.
LEARN MORE