By
William Wilkes
Updated on 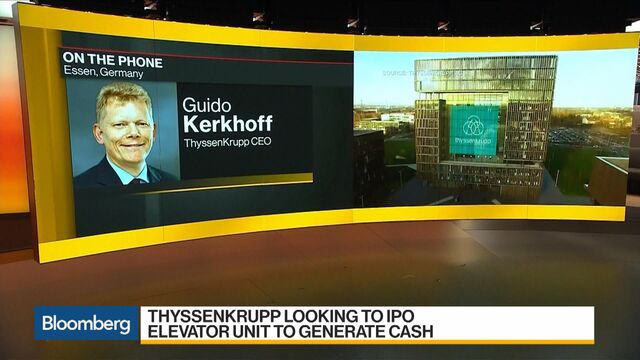 Thyssenkrupp AG, among the last of corporate Germany’s sprawling conglomerates, is finally considering a major breakup after Europe’s economic slowdown forced it to slash its profit outlook.

The firm said publicly for the first time that it would be open to selling a range of divisions, siding with investors who have long demanded management whittle down the steel-to-submarines behemoth. That’s after Thyssenkrupp’s financial results for the quarter revealed it’s continuing to spiral downward as trade disputes and weakening export demand damage Europe’s biggest economy. The stock rose as much as 3.2% in Frankfurt.

To stem a years-long decline, Chief Executive Officer Guido Kerkhoff is looking for ways to raise money and streamline a business that’s been hammered by falling auto sales and investor dissatisfaction with management.

“We will not allow a situation to continue where businesses with no clear prospects permanently burn money and destroy value,” the CEO said in an interview.

Headquartered in the smokestack Ruhr region, the embattled industrial icon is part of industrial Germany’s heartland. Breaking up its conglomerate structure has met fierce resistance from unions and its major shareholder, a foundation set up by descendants of the founders that’s been a guardian of the status quo. Now that united front is cracking in the face of a persistent slowdown.

Thyssenkrupp will press ahead with plans to list its elevator unit, the company’s most profitable unit as it rides the global mega-trend for urbanization, according to a statement released Thursday. Private equity firms including CVC Capital Partners and KKR & Co., as well as rival elevator maker Kone Oyj, have expressed interest in part or all of the division, according to people familiar with the matter. Analysts have estimated that the elevator division could be valued at about 15 billion euros.

"We have clearly received a lot of interest from external parties for our elevator business, which we are currently evaluating in case there are alternative options," Kerkhoff said in an interview with Bloomberg TV.

In addition, Thyssenkrupp listed three smaller businesses that will be considered for restructuring or disposal.

“We definitely see opportunities for their further development but not necessarily under the umbrella of Thyssenkrupp,” Kerkhoff said.

(Updates with share reaction.)
Published on
Updated on
Have a confidential tip for our reporters?
GET IN TOUCH
Before it's here, it's on the Bloomberg Terminal.
LEARN MORE