By
Annie Lee
and
Fion Li
Updated on

By
Annie Lee
and
Fion Li
, 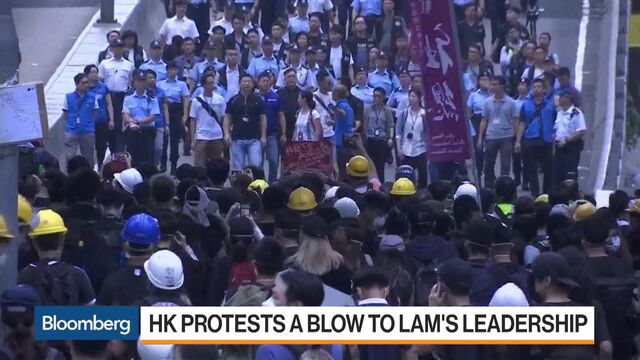 Hundreds of thousands of black-clad demonstrators are marching through central Hong Kong in a show of defiance after the city’s leader suspended consideration of the China-backed extradition plan that has already sparked some of the biggest protests in the city in decades.

Organizers say that Sunday’s protest may be larger than last week’s demonstration, when they estimated more than 1 million people filed through the city center. The police say that rally drew 240,000.

At 7:30 p.m., five hours after the start of the Sunday march, thousands were still gathering at the city’s Victoria Park to begin the nearly 2-mile walk to the Legislative Council building in the Admiralty district.

The protesters are now demanding Chief Executive Carrie Lam’s resignation and have vowed to continue taking to the streets until the bill is completely withdrawn.

Lam apologized to Hong Kong’s public in a statement, reiterating that the government has stopped work on the bill.

“For the public to express their opinions in a peaceful and rational way, the Chief Executive clearly heard and agreed that this is precisely the spirit of mutual respect and harmony that Hong Kong has always demonstrated as a civilized, free, open and pluralistic society. The government values ​​and cherishes these core values ​​of Hong Kong,” she said.

“In view of the strong disparate views of the community, the Government has stopped the work of the Legislative Council General on the revision of the Fugitive Offenders Ordinance. It is hoped that this will allow the community to restore calm and avoid any harm. The government reiterated that there is no timetable for restarting the process.”

She added: “Many members of the public are disappointed and saddened. The chief executive apologizes to the public and promises to accept it with the utmost sincerity and humility.”

With the crowd choking the official route of the march, protesters have begun spilling into other roadways. Harcourt Road has begun to fill up with demonstrators who are blocking traffic in one of the main thoroughfares running through the Admiralty commercial and business district, near the government headquarters that marks the end of the march. Other roads in the Wan Chai district were also being invaded by demonstrators.

A member of the Civil Human Rights Front, the protest organizer, addressed the crowd and said the demonstration was bigger than last Sunday’s rally, when organizers estimated more than 1 million took to the streets. The police estimated that crowd at 240,000.

A crowd of people chanted the Cantonese word for “Retract!"’ over and over, a message to Lam to permanently scrap the bill. One cafe along the route posted a sign to its front window: “Everyone keep up the hard work... if you are tired, come in and we’ll give you a glass of water.” Major roads were increasingly packed along the route, and people took to looking for space on the pedestrian bridges that cross over them.

One bright yellow sign carried by a protester in Admiralty read: “HK police force, you should be ashamed to call yourself Hongkongers.” Another: “Salute to HK young people.”

The area around the Legislative Council building in central was packed by early evening, the protest peaceful. Apple Daily estimated that the march was 5 kilometers long as it crawled through the city’s streets -- the crowd so huge it was backed up to the neighborhood of North Point, almost a kilometer beyond the start. The green grass at Tamar Park, on Victoria Harbor, was a sea of black as protesters sat.

Further back down the protest route, one man held a sign that read “Make Love, no shoot! No extradition to China,” and stickers emblazoned with the latter slogan were handed out. A small memorial had been erected for a protester who died Saturday after falling from scaffolding at the Pacific Place mall in Admiralty.

The first marchers have reached the legislature, the protest’s destination. Behind them, thousands of people walk slowly -- or not at all, as foot traffic jammed streets leading along the nearly 3 kilometer back to Victoria Park. In some places people joined from all directions, getting funneled into one street. Demonstrators in the financial district of Wan Chai sang one of the protests’ unofficial anthems, ‘‘Sing Hallelujah to the Lord.’’

People wearing black also packed Hong Kong station, one of the city’s main transit hubs, and subway trains weren’t stopping at the Causeway Bay and Tin Hau stations, which are situated along the protest route. Crowds of people were walking back toward the march from the Central station. Crowds appeared to match last Sunday’s, which were in the hundreds of thousands. Police and protesters had yet to give official crowd sizes.

Some protesters called for Lam to resign, echoing statements from organizers and opposition lawmakers. In the park, 19-year-old student Venus Leung folded white paper flowers as she and her friends waited to join the crowd.

There is “nothing Carrie Lam can do to win back our hearts. She can only step down,” Leung said. She said she would keep protesting until Lam resigned.

The march choked Causeway Bay, one of Hong Kong’s most crowded shopping and tourism districts, as people made their way from Victoria Park to the city’s Legislative Council building. At one point, there was a mass rendition of “Do You Hear the People Sing,” the pro-democracy anthem from the musical “Les Miserables.” (Sample lyrics: “Will you join in our crusade? Who will be strong and stand with me?”) Protesters have sung this over the last week.

Though there were no definitive early crowd estimates on the nearly three-kilometer route, but it was safe to say marchers numbered in the tens of thousands -- possibly hundreds of thousands. Main thoroughfares Queens Road and Hennessy Road, which cut through central parts of the city, were wall-to-wall.

“This isn’t the first time Hong Kong people have marched in the streets in great numbers,” said Alan Leong, a former opposition lawmaker, as he waited to join the march from the park. “I really think the Chinese Communist Party has to do a sea change in its approach to engage people in Hong Kong.”

A large banner being carried by the crowd reads, in Cantonese letters, “A small spark can start a prairie fire.” Protesters at the front of the crowd chant “children are not rioters.” Others chant “add oil,” a popular Chinese saying that means to add fuel, or accelerate. There are no crowd estimates yet. Some people are also calling for the resignation of police commissioner Stephen Lo.

Shopping complexes Sogo and Hysan Place, near the marching route, were packed with people. At Hysan, the escalators were stopped so people can walk downstairs and join the demonstration, and someone was handing out voter registration forms outside.

Peaceful crowds dressed largely in black filled Victoria Park around the gathering time called by organizers, and began marching toward Hong Kong’s Legislative Council building. One sign read: “Help Hong Kong. R.I.P.” Others chanted one word: “Retract.” Many carried umbrellas, which have been used as protection from pepper spray fired by police in past protests.

Marchers in black also walked toward the police headquarters in Admiralty, ground zero for clashes earlier this week between demonstrators and police.

“Our demands are clear and firm,” Jimmy Sham, one of the main protest leaders, said as he addressed the crowd. Among his calls were for the bill’s withdrawal, the retraction of Lam’s characterization of protesters as rioters, and her resignation.