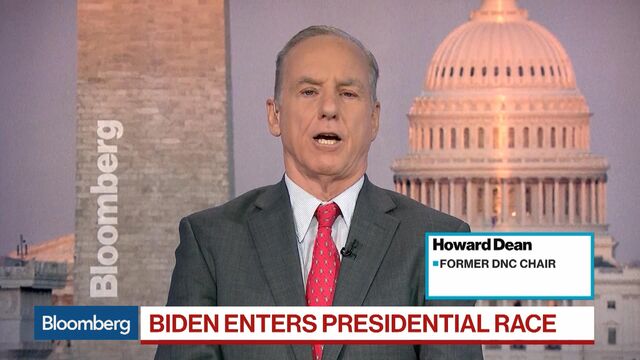 Joe Biden will have to quickly establish that he can sustain his position at the top of the Democratic presidential field in a political environment that’s changed dramatically since he was last on a ballot.

The former vice president pitched himself in a video Thursday as a leader who would restore the values of the country. He will also have to reconcile some of the contradictions his candidacy represents as he begins campaigning next week in the states that hold the first series of caucuses and primaries.

The core values of this nation… our standing in the world… our very democracy...everything that has made America -- America --is at stake. That’s why today I’m announcing my candidacy for President of the United States. #Joe2020 https://t.co/jzaQbyTEz3

Currently 76, Biden would be the oldest president ever elected, but he’s running in a party with a voting base that’s becoming younger, less white and more female. He’s a moderate institutionalist in a party tilting leftward and embracing populists who want to upend the system. He has faced allegations of inappropriate contact with women while courting support from the party aligned with the #MeToo movement.

He would be the 45th consecutive male elected as president and the 44th white man in a racially and ethnically diverse Democratic primary field that includes a record number of women.

And yet Biden is the man to beat, boosted by universal name recognition, a reputation in the party as a steady hand, and a nostalgia among many Democrats for the Barack Obama presidency he served in. The packed 2020 field may be an asset to him, starving some of his rivals of the attention they need to rise above the clutter.

Read more: Biden pledges to defend the “character of this nation”

“He’ll be very formidable. He and Bernie Sanders are going to be the front-runners in this race,” said Tad Devine, a veteran Democratic strategist who advised the primary campaigns of Sanders in 2016, John Kerry in 2004 and Al Gore in 2000. “He’s satisfied people on the most important standard they’re going to look to — whether or not he can defeat Trump.”

“He’s also going to have to deal with things like the Iraq war vote; or abortion, where he’s been on both sides of that issue in the past; and race, where he has to deal with everything from busing to the crime bill,” Devine said.

Howard Dean, a former chairman of the Democratic National Committee, said Biden’s biggest challenge is age. The party, he said, is shifting to younger people, women and minorities, and they helped Democrats win the House in the midterm elections.

“Joe’s challenge is to reach that new generation that got into politics and was largely responsible for the 40 seats we picked up in 2018,” Dean said on Bloomberg television.

That also may affect Sanders, Biden’s main competitor at this point. Sanders represents the progressive wing of the party that is active and vocal in the primary race, but he’s a year older than Biden, at 77.

While Biden has indicated he’ll lean heavily on his tie to Obama, the former president is holding off making any endorsements at this stage of the primary campaign.

Obama did offer praise for Biden through his spokeswoman Katie Hill, who said he “relied on the vice president’s knowledge, insight, and judgment throughout both campaigns and the entire presidency.” In a statement timed to Biden’s announcement, she said they "forged a special bond over the last 10 years and remain close today."

Biden told reporters Thursday in Delaware that he asked Obama not to endorse him. “Whoever wins this nomination should win it on their own merit,” Biden said in remarks broadcast on MSNBC.

Devine said Biden has yet to show strength in small-dollar fundraising or an ability to adapt to "a different world than 2012" that’s much faster, where a single gaffe can land on millions of voters’ smartphones in an instant.

The long lead-up to an announcement, with the date shifting several times from what people close to Biden said they expected, also suggests a candidate who may have been conflicted about the race, something that is likely to reveal itself in a campaign.

Biden is one of the few Democratic candidates President Donald Trump has preemptively attacked with a belittling nickname on Twitter -- the others include Sanders and Senator Elizabeth Warren. Trump took to Twitter Thursday morning to “welcome” Biden to the campaign.

Welcome to the race Sleepy Joe. I only hope you have the intelligence, long in doubt, to wage a successful primary campaign. It will be nasty - you will be dealing with people who truly have some very sick & demented ideas. But if you make it, I will see you at the Starting Gate!

But Biden’s candidacy has caused pangs of anxiety in the president’s orbit.

“Biden is ultimately the candidate Trumpworld fears the most: he’s immensely credible and appeals to the centrist, working Americans who ultimately will decide the winner,” said Dan Eberhart, an oil-and-gas executive and Republican financier with ties to the Trump campaign.

A Monmouth University national poll of Democratic voters released Tuesday found Biden leading the field with 27 percent support, ahead of Sanders’s 20 percent. Behind them with single digits, in a statistical tie for third place, were South Bend Mayor Pete Buttigieg, Senator Kamala Harris of California, Warren of Massachusetts and former Texas Congressman Beto O’Rourke. Everybody else had 2 percent or less.

"He’s got a lot of very seasoned people around him. The team understands not to believe the early polls and knows he’s got a hard fight ahead of him," said Jennifer Palmieri, a former top aide in the Obama White House and Clinton 2016 campaign. "Being a front-runner comes with a lot of scrutiny and high expectations that are hard to manage, and the Biden team is aware of all that."

His 36 years as a senator from Delaware, before eight years as Obama’s vice president, include a record he can brag about, such as his authorship of the 1994 Violence Against Women Act, which he calls his proudest accomplishment. He supported gun control laws like the assault weapons ban, which progressives are seeking to revive.

But there’s also a trove of material that makes him vulnerable to attack — like his handling of Anita Hill’s allegations against Supreme Court nominee Clarence Thomas, his 2002 vote for the Iraq war, his championing of the 1994 crime bill that exacerbated racial disparities in incarceration, and his 1999 vote to repeal the Glass-Steagall financial regulation law. (He has said in recent years the latter two were a mistake.) He has also faced criticism for his past skepticism of abortion rights and busing to racially integrate schools.

Matt Gorman, a Republican consultant who worked on Jeb Bush’s ill-fated 2016 campaign, said he sees parallels between the onetime GOP frontrunner and Biden’s bid. “Jeb’s candidacy had to relitigate issues from the party’s past that it was thought to have moved on from,” he said.

Sean McElwee, a left-wing organizer with the group Data For Progress, conducted a study testing the messages likely to hurt Biden’s support among Democrats and found a potential weakness in his vote for a 2005 bill, backed by banks and credit-card companies, that made it harder for cash-strapped Americans to declare bankruptcy.

“He’s more formidable than many on the left want to admit, but he is absolutely beatable,” McElwee said. “We have to focus on the right attacks: he’s benefited the rich at the expense of working class families.”

Some rival campaigns are preparing to make contrasts with Biden, particularly on his economic record. Devine said they must do so cautiously and substantively without appearing to go negative, arguing that frontal attacks will tarnish their own popularity with voters.

"If anybody goes after Biden overtly they’re going to sink themselves," Devine said.

The former vice president has yet to stake out a position on issues pushed by various Democratic contenders that are capturing the passions of the party’s liberal base, such as Medicare for All and a Green New Deal. How he handles these questions will likely endear him to some Democratic votes and alienate others.

Biden recently addressed allegations from Lucy Flores, a former Nevada assemblywoman, that he inappropriately smelled her hair and kissed the back of her head five years at a 2014 event. In a two-minute video posted to Twitter earlier this month, Biden said he’s always sought to show affection and make human connections in his career but sees the error of his ways.

“Social norms have begun to change, they’ve shifted. And the boundaries of protecting personal space have been reset. And I get it. I get it,” Biden said. “I’ll be much more mindful. That’s my responsibility.”

— With assistance by Margaret Talev, and Jennifer Epstein