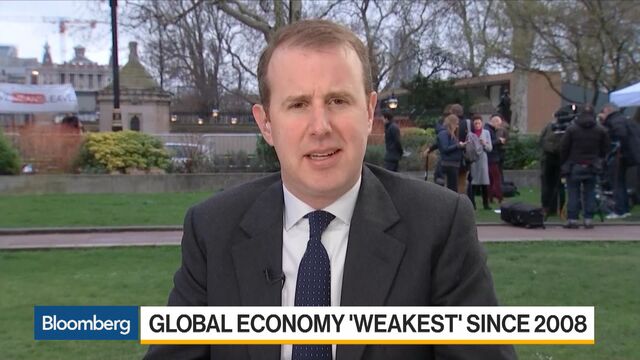 While the S&P 500 Index pushed its two-day gain to 1.8 percent, Brexit and renewed turmoil for Boeing dominated headlines throughout the day. The planemaker sank as a slew of countries grounded its troubled 737 Max jets. Sterling fell after U.K. lawmakers rejected the government’s latest deal to leave the European Union, with uncertain implications for the country’s political future. The 10-year Treasury yield slumped with the dollar. Crude rose.

“I expect equity markets to remain volatile and to tread water, and there is still too much risk in risk assets, and ultimately I think bond yields will head lower but this is a process that unfolds, it’s not a sudden event,” Suzanne Hutchins, a senior portfolio manager at Newton Investment Management in London, said in an interview at Bloomberg’s New York headquarters.

The pound whipsawed amid the Brexit drama, rising overnight after Theresa May won a new deal to leave the EU. It tumbled as much as 1.1 percent versus the dollar as the deal’s fate looked uncertain, only to pare the drop amid parliamentary debate. The vote to reject the pact sent it lower again.

Alongside Brexit developments, investors have a slew of economic data to digest this week. The latest inflation reading came amid falling prices for autos and prescription drugs, adding to evidence the American economy is in no danger of overheating. In the coming days the focus will turn to Chinese production and retail sales, as well as a Bank of Japan policy decision.

Here are some of the key events coming up:

And these are the main moves in markets: