Seven Things You Need to Know About SoftBank's $21 Billion IPO

By
Pavel Alpeyev
Updated on

Seven Things You Need to Know About SoftBank's $21 Billion IPO 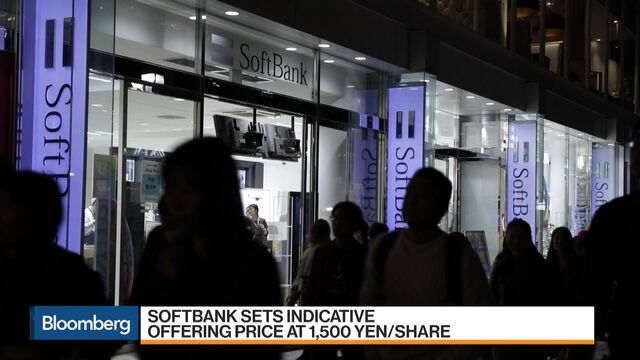 Masayoshi Son spent years building SoftBank Group Corp. into a telecommunications giant. Now he’s selling off a chunk of the business that made his fortune so he can move on to the next act.

Son, 61, is looking to raise about $21 billion through an initial public offering of his Japan telecom operations in what could be the country’s largest IPO ever. Here’s what you need to know about the IPO, the shares coming up for sale and the enigmatic billionaire behind the deal.

What is on offer?

SoftBank’s domestic telecommunications business spans wireless, broadband and fixed-line services and its brand is widely recognized with storefronts throughout the country. It’s the third-largest wireless operator behind NTT Docomo Inc. and KDDI Corp., but SoftBank has a reputation for innovation and low prices. Son, for example, got exclusive rights to Apple Inc.’s iPhone in Japan for three years, letting him swipe customers from his rivals almost at will.

SoftBank is selling off about one third of the business in the IPO, offering at least 1.6 billion shares at 1,500 yen each. At that price, it would surpass the offering of former national carrier Nippon Telegraph & Telephone Corp. in 1987. The IPO price range will be set on Nov. 30, followed by the final price Dec. 10. The new entity called SoftBank Corp. will start trading on the Tokyo Stock Exchange on Dec. 19.

So are the shares a good buy?

Son is betting they will be. SoftBank says it’s targeting a dividend payout ratio of about 85 percent of net income for the new company. That is much higher than the dividends at Docomo and KDDI. Based on SoftBank’s net income in the last fiscal year, investors who buy at the preliminary IPO price would get a dividend yield of almost 5 percent. That’s healthy anywhere. In Japan, the land of negative interest rates, it’s dazzling.

Oh yeah, plenty of those. The whole of Japan’s wireless industry may be headed for serious pricing pressure. If that happens, then SoftBank’s profit could tumble and those rich yields will start to look paltry.

Japan’s government has been pounding carriers to lower rates, among the highest in the developed world. Just two weeks ago, Docomo said it may cut rates 40 percent and return billions to customers. That wiped $34 billion off the market values of the top three carriers. But it’s not clear Docomo will follow through. The company, partly owned by the government, has spent years side-stepping pressure. Indeed, Docomo’s announcement may very well have been timed to hurt Son just as he was trying to raise money.

So who gets to buy shares?

Almost all the action will be in Japan. SoftBank’s underwriters, led by Nomura Holdings Inc. and Daiwa Securities Group Inc., are primarily targeting retail investors in the country. They are planning to sell the vast majority of the shares to individuals, with the remainder split between domestic and foreign institutions, people familiar with the matter said this month. About 90 percent of the shares will be sold in Japan.

There is likely to be plenty of demand from mom-and-pop investors. SoftBank, with 34 million mobile service subscribers in Japan, is perceived as a safe investment by retail investors, despite Son’s penchant for risky bets. It also owns Fukuoka SoftBank Hawks, a professional baseball team that this month won the championship.

What is the money for?

Son wants more cash to bet big on technology. He has said that he sees unprecedented opportunity in technologies from artificial intelligence to the Internet of Things. Last year, he formed the $100 billion Vision Fund with money from Saudi Arabia, Apple Inc. and others , and he’s quickly become the biggest investor in technology.

Son has said he plans to raise a new $100 billion fund every two or three years and the IPO would give him capital to put into future funds. SoftBank contributed $28 billion to the first Vision Fund so it would likely need to chip in about the same amount in future deals.

What does this mean for SoftBank’s investors?

The IPO might help boost the share price, which for years has suffered from a considerable conglomerate discount. While the Tokyo-based company has a market value of about 9.7 trillion yen, its publicly-traded holdings including Alibaba Group Holding Ltd. and Yahoo Japan Corp. alone are worth more than 15 trillion yen.

One way to narrow the valuation gap is to purchase the company’s own stock and the IPO could provide the needed funds. SoftBank’s last buyback was in February 2016, when it announced plans to spend as much as 500 billion yen to acquire about 14 percent of its shares. In September, the stock touched its highest level since 2000, but it’s erased the gains this year amid a general decline in technology shares.

What does this mean for Son?

Son is embarking on yet another transformation in his long career as an entrepreneur. Since founding SoftBank in 1981, he has distributed software for personal computers, published trade magazines, sold broadband internet services and operated Comdex, the now-defunct trade show. He made tech investments along the way, including early bets on Yahoo! and Alibaba.

He got into the wireless business just over a decade ago by acquiring the Japan operations of Vodafone Group Plc. Now he’s determined to refocus his attention on technology investments as he heads into the last decade of his career.