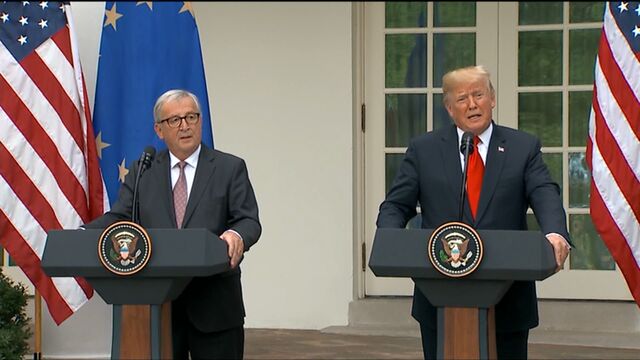 European carmakers climbed after President Donald Trump backed off his threat to levy tariffs on cars imported to the U.S. during a meeting with European Commission President Jean-Claude Juncker, averting for the time being an escalating trade war.

Shares of BMW AG, Volkswagen AG, Fiat Chrysler Automobiles NV and Daimler AG jumped on Thursday following a pledge from the two leaders to “hold off on other tariffs” while they negotiate a deal to expand European imports of U.S. liquefied natural gas and soybeans and lower industrial levies. Germany’s VDA auto industry association called the meeting “a big step forward” and “good news for industry and consumers on both sides of the Atlantic.”

The two met Wednesday at the White House with Trump warning that he would move forward with 25 percent tariffs on auto imports if the meeting with Juncker didn’t go well, prompting the EU to respond that such a move would bring significant retaliatory measures on U.S. goods. The breakthrough came after about three hours of talks, leading to their impromptu announcement in the Rose Garden.

“We had a big day, very big,” Trump said during a press conference with Juncker. “We are starting the negotiation right now, but we know where it is going.” Trump hailed “a new phase” of trade relations.

The deal eases tensions for now stoked by Trump’s threat to impose new levies on car imports. BMW climbed as much as 5.5 percent on Thursday and was up 3.2 percent in Frankfurt as of 12:15 p.m. Volkswagen was 3.3 percent higher and Daimler up 2.6 percent. Fiat traded 4.4 percent higher in Milan.

Reaction in Germany, which would be one of the biggest losers in a trade war, was broadly positive. Economy Minister Peter Altmaier tweeted that the meeting’s outcome was a “breakthrough” that “can avoid trade war and save millions of jobs.” Ulrike Demmer, a deputy government spokeswoman, reaffirmed Germany’s backing for the Commission in future negotiations.

You Think GM’s Forecast Was Bad? Look What Auto Tariffs Would Do

Trump could impose the 25 percent car tariffs on national security grounds once Commerce Secretary Wilbur Ross completes a required investigation, which could come anytime before a deadline by early next year. Auto tariffs at that level would add about 10,000 euros ($11,700) to the sticker price of a European-built car sold in the U.S., according a European Commission assessment obtained by Bloomberg News last month. That would cut U.S. imports of European cars and car parts in half, the commission forecast.

Trump on Wednesday said they would try to “resolve” steel and aluminum tariffs he imposed earlier this year and retaliatory duties the EU levied in response. The U.S. and EU also will work together to reform the World Trade Organization and address unfair trading practices, they said in a joint statement.

“Tariffs were, are and will not be great, even if the U.S. president claims as such in his tweets,” said Eric Schweitzer, president of the DIHK chambers of industry and commerce. “The solutions set out go in the right direction but a healthy dose of skepticism remains.”

Marcel Fratzscher, head of the Berlin-based DIW economic institute, said the meeting had produced “a deescalation but not yet the all-clear” and warned of U.S. possibly “manipulating” the World Trade Organization for its own goals and “further weakening multilateralism.”

The truce may prove to be short-lived if the two sides can’t resolve their differences over trade in vehicles and car parts. In May, Trump abandoned a framework for trade negotiations with China within days of it being announced, before ratcheting up tariffs.

Trump says a 10 percent tax on imports of cars to the EU is too high compared with the 2.5 percent rate charged by the U.S., and he’s also been critical of the EU over its $150 billion trade surplus with the U.S.

Still, the deal announced Wednesday with the EU is an encouraging sign that America’s trade partners may be able to placate the Trump administration with offers to buy more U.S. goods, averting a trade war that the International Monetary Fund has warned may undermine the strongest global upswing in years.

“It’s going to help defuse some of the concern out there, not only in farm country but in our economy generally,” said Senator Rob Portman, an Ohio Republican. “It’s a first step. We’ve still got to work out the details. But it’s been hard these last few weeks to see any light at the end of the tunnel,” with no signs of progress with the EU, Mexico, Canada or China.

(Updates with German government reaction in sixth paragraph.)
Have a confidential tip for our reporters?
GET IN TOUCH
Before it's here, it's on the Bloomberg Terminal.
LEARN MORE