By
Nick Turner
and
Brian Louis
Updated on

By
Nick Turner
and
Brian Louis
, 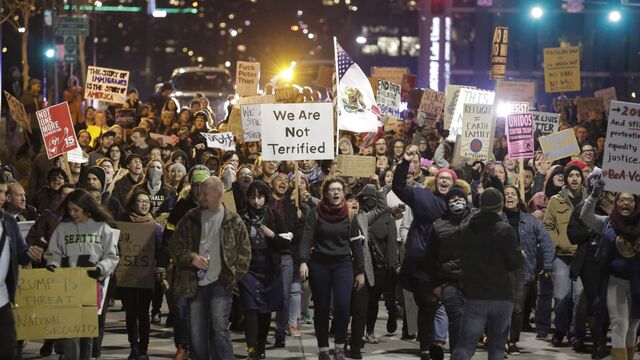 Trump issued an order on Jan. 27 suspending the admission of refugees into the U.S. for 120 days and banning citizens from seven predominantly Muslim countries for 90 days. The directive has been criticized by U.S. allies Canada and Germany.

Starbucks is in direct contact with employees affected by the immigration ban and will do “everything possible to support and help them to navigate through this confusing period,” Schultz said in a letter to employees posted on the coffee chain’s website. Schultz also said that he and Chief Operating Officer Kevin Johnson, who is due to take over as CEO this year, will begin communicating with workers more frequently through the Workplace program by Facebook Inc.

“I am hearing the alarm you all are sounding that the civility and human rights we have all taken for granted for so long are under attack, and want to use a faster, more immediate form of communication to engage with you on matters that concern us all as partners,” Schultz wrote.

Schultz said he strongly supported the “Dreamers” program, designed to help immigrants who arrive in the U.S. as children. The company also is offering legal counsel to a “handful” of employees who’ve been affected by Trump’s ban.

In posting the letter, Schultz delivered one of corporate America’s fiercest rebukes against Trump’s immigration order. The message also brought a backlash from some Americans. The hashtag #BoycottStarbucks was trending in the U.S. on Monday morning. But Schultz wasn’t alone in criticizing Trump’s move. Google CEO Sundar Pichai, an immigrant from India, called the policy “painful,” and Goldman Sachs CEO Lloyd Blankfein said it’s “not a policy we support.”

Trump wants to build a wall on the border with Mexico and possibly pay for it with a 20 percent tax on Mexican imports in a bid to stem illegal immigration. Schultz wrote that the company would “help and support our Mexican customers, partners and their families as they navigate what impact proposed trade sanctions, immigration restrictions and taxes might have on their business and their trust of Americans.” Starbucks “will continue to invest” in Mexico, he wrote.

“We are living in an unprecedented time, one in which we are witness to the conscience of our country, and the promise of the American Dream, being called into question,” he said.

(Updates with Workplace by Facebook in third paragraph.)
Published on
Updated on
Have a confidential tip for our reporters?
GET IN TOUCH
Before it's here, it's on the Bloomberg Terminal.
LEARN MORE