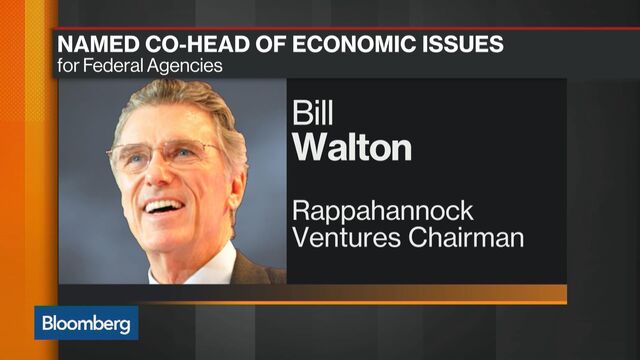 Bill Walton was at the top of Washington’s finance establishment when he ran Allied Capital Corp. and sat on the Riggs Bank board alongside the city’s titans. Then the trouble began.

Hedge fund manager David Einhorn accused Allied in 2002 of inflating the value of its holdings, sparking a fight that lasted years. A subsidiary that loaned to small businesses agreed to settle fraud claims with the Justice Department for $26.3 million in 2010, an executive went to prison and Allied, hobbled by the financial crisis, was sold. So was Riggs, after it was fined $16 million for helping former Chilean dictator Augusto Pinochet and Equatorial Guinea officials hide funds. A judge called the bank “a greedy corporate henchman.”

Walton, who wasn’t accused of wrongdoing, has mostly stayed under the radar since then, playing the villain in a short steampunk-themed Western and running a private equity firm that lists his wife and their terriers on its leadership page. Things changed this month when he was named to Donald Trump’s transition team as co-head of economic issues for federal agencies. The appointment shows just how comfortable Trump is giving influence to banking veterans after denouncing them in his campaign. And it puts Walton back in the spotlight, offering him a chance to help shape the government.

“Regulators possess a great deal of unilateral and, too often, arbitrary power,” Walton, 67, said in an e-mail. “So in addition to Mr. Trump’s call to reduce the number of regulations, I believe we need to rethink how the regulatory process should work.”

Walton has been active in conservative groups and is a vice president of the Council for National Policy, which aims to shrink the government. He told a gathering on gay marriage last year that Christianity, the family, the Boy Scouts and the military were victims of “systematic deconstruction.” In a column on Fox News’s website a few months later, he said the Supreme Court’s recognition of same-sex marriage “strikes a dagger in the heart of our freedom to work and live in accordance with our beliefs.”

That same year he became a trustee of the Heritage Foundation, which advocates for less gun control and environmental regulation. His peers there include hedge fund heiress Rebekah Mercer, a member of Trump’s transition team whose family is trying to use its fortune to reshape conservative politics.

Walton is running his transition group with David Malpass, chief economist at Bear Stearns Cos. until its 2008 collapse. They oversee teams that receive briefings from Treasury and Commerce department officials and then report back to the Trump administration as it develops policy and picks staff. Their purview also includes the Small Business Administration, which backed Allied’s loans, and the Securities and Exchange Commission, which said the firm lacked procedures to ensure its holdings were valued properly. Allied settled the SEC probe in 2007 without paying a fine or admitting or denying the findings.

“I read it and my eyes squinted like an owl,” Marc Cohodes, an investor who bet against Allied in 2002, said after he saw the news about Walton’s transition role. “You have got to be kidding me.”

The Trump role boosts Walton’s odds of getting a job in the new administration. Stephen Moore, a member of Trump’s economic advisory council, has already recommended that Walton be made commissioner of the Internal Revenue Service. “I think he would be fantastic,” said Moore. “He’s a take-no-prisoners kind of guy.” Walton said in a speech last year that the U.S. “should get rid of the corporate tax altogether.”

In 2002, Einhorn accused Allied of not properly recording the market value of investments in privately held firms and high-yield bonds. The company denied wrongdoing, saying Einhorn and short-sellers were out to scare “little old ladies” who owned Allied’s stock.

Prosecutors subpoenaed Allied in late 2006 over its use of private investigators after Einhorn said a woman called his phone company, said she was his wife and used her Social Security number to get their phone records. Allied said “an agent of the company” obtained the records without company management knowing about it. Einhorn, who wrote the 2008 book “Fooling Some of the People All of the Time” about Allied and made a fortune betting against Lehman Brothers Holdings Inc. before its collapse that year, wouldn’t comment for this story.

In 2008, a former executive vice president of Allied’s Business Loan Express was sentenced to 10 years for what prosecutors called the largest single fraud in SBA history. His creation of faulty loans backed by the agency “inflicted mammoth injury” on the subsidiary, a judge said. But they weren’t the only loans that prompted the fraud settlement. The financial crisis, meanwhile, took a toll on Allied’s stock. In October 2009, the company agreed to sell itself to Ares Capital Corp.

PNC Financial Services Group Inc. bought Riggs in 2005, after it pleaded guilty to failing to report transactions in secret accounts held by Pinochet and African officials, whose balances and loans were almost $700 million by 2003. Walton had been on the board of the bank’s parent, Riggs National Corp., since 1999.

After graduating with an MBA from Indiana University’s Kelley School of Business, Walton later became an investment adviser to CBS Corp.’s William S. Paley and worked as a mergers banker at Lehman Brothers, according to his website. His Rush River Entertainment produced “Max Rose,” starring Jerry Lewis, which got shaky reviews this year.

Walton did some acting, too, and a reel of his work shows him dabbling in a variety of genres. In the Western, which filmmakers are seeking to develop into a feature, he wears a black cowboy hat and leads a posse that includes a man in a gas mask. In a fantasy project, he plays a king who reminisces about battles of yore. In an unfinished third, he plays a magnate whose wife will apparently be cured by a gene taken from the blood of a little girl.

“I voted for Trump, saw that and was shocked,” Jim Brickman, an Allied critic who filed a lawsuit against the company, said in an e-mail about Walton’s new role. “This is filling the swamp, not draining it.”

— With assistance by David Voreacos