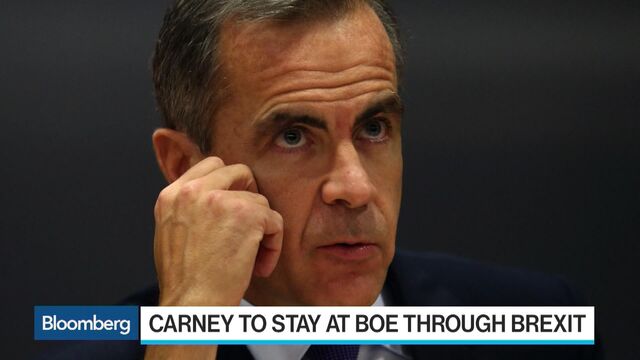 Theresa May might find the benefits of Mark Carney’s new personal Brexit strategy are rather short-lived.

By choosing to leave the Bank of England in mid-2019 rather than his initial plan of 2018, Carney is giving the economy a helping hand through the end of the U.K.’s split with the European Union. Yet by still declining to serve a full 8-year term through 2021, he’s forcing the prime minister to search for a skilled successor just as those talks reach their climax and executives and investors are coming to terms with what the post-Brexit economy looks like.

Follow @Brexit for the latest news, and sign up to our Brexit Bulletin for a daily roundup.

The BOE governor has been aggressive in providing stimulus to the British economy since the June referendum and his decision, after months of speculation over his future, provides a continuity that investors have welcomed. The key risk now is that with talks on the departure from the EU scheduled to begin by the end of March and last for two years, the economy will be struggling to find its feet outside the trading bloc before he leaves.

“It’s a critical point, 2018 to 2019,” said Philip Shaw, an economist at Investec Securities in London. “It was tricky enough getting Carney into the job in the first place. In 2019 the challenge will be just as great.”

That year will be a test for Europe as a whole, with Brexit and Carney’s departure set to take place just before the European Central Bank changes its own leadership. Mario Draghi is due to step down as president in October 2019 at a time when his institution might be tentatively trying to work out how to exit its own massive stimulus program.

“This is the ultimate compromise,” said James Rossiter, senior global strategist at TD Securities in London, and a former Bank of England official. “If they are not quite done by then, hopefully negotiations are well underway and his departure is maybe not quite as negative for the economy.”

Carney’s choice won’t be welcome to everyone. The governor is not a popular figure among those who campaigned for Brexit, who argue he undermined the three-century old BOE by showing political bias during the referendum campaign and underestimating the economy’s resilience. Daniel Hannan, a member of the U.K. Conservative Party, told BBC radio on Monday that for Carney, “it’s important to comport yourself as a quiet and discrete public servant who errs on the side of saying too little.”

The head of parliament’s Treasury Select Committee Andrew Tyrie -- who helped spark the debate about Carney’s tenure by requesting clarity at the start of this year -- is also critical of breaking the 8-year term set down in statute and said lawmakers will need to examine the decision when the governor next testifies.

“The Treasury Committee concluded in November 2011 that a non-renewable term of eight years for the post of governor was appropriate,” he said in a statement Monday. “More uncertainty needs to be avoided. So the decision requires a good deal of examination and explanation, which the Committee will seek when it next sees the Governor.”

By remaining in the role, Carney may help to quell speculation that May could seek to curb the BOE’s independence. While she sought to row back on her comments last month that loose monetary policy has caused “bad side effects,” they fueled a fresh torrent of criticism of Carney by members of her party and prompted him to push back, saying that officials would not take instruction from lawmakers.

One question lawmakers might ask is whether Carney would consider a further extension of his tenure if Brexit negotiations are still ongoing in 2019, given he is not tied to any fixed term.

The transition to a new governor “may create some disturbance, especially if the negotiations are not concluded during the two years,” said Mikael Olai Milhoj, a senior analyst at Danske Bank A/S. That is “not an unrealistic scenario.”

— With assistance by Zoe Schneeweiss

(Adds pound in seventh paragraph.)
Have a confidential tip for our reporters?
GET IN TOUCH
Before it's here, it's on the Bloomberg Terminal.
LEARN MORE