Powell Marks the Start of a Treacherous Retreat

Powell Marks the Start of a Treacherous Retreat

Powell Marks the Start of a Treacherous Retreat
Subscriber Only
Markets 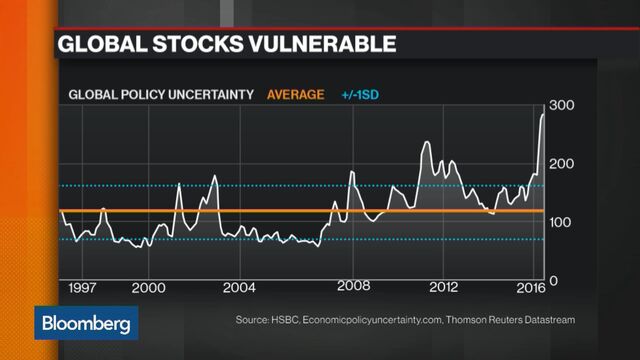 A Bumpy Ride for Equities by End of the Year?

Yesterday's big stocks drop may have just been the beginning.

Or so says HSBC Holdings Plc technical analyst Murray Gunn. In a new note, Gunn says he is now on alert for a big dip in U.S. equities. "With the U.S. stock market selling off aggressively on October 11, we now issue a RED ALERT," he writes. "The possibility of a severe fall in the stock market is now very high," he adds, noting that volatility has continued to rise since the end of the summer and the recent sell-off was seen across many areas of the market, and not just select groups.

Also causing some concern for Gunn is the intensity of the selling pressure, measured by what's called the Traders Index, an indicator that combines both market breadth and the trading volume of advancing stocks versus declining stocks. The higher the index, the more bearish that day's trading.

Earlier this week, Ben Laidler, global equity strategist at HSBC Holdings Plc told Bloomberg TV in an interview that the stock market is exposed to "a dangerous combination" of risk factors that investors aren't looking at closely enough. Reasons for his caution included high earnings expectations, economic-policy uncertainty as well as the upcoming U.S. election and the Italian referendum. "We think markets are pretty vulnerable," he concluded.

The key levels that Gunn and his team are watching are 17,992 in the Dow Jones Industrial Average and 2,116 in the S&P 500. (As of 10:15 a.m. in New York, the Dow was trading at 18,147 and the S&P 500 at 2,140.) "As long as those levels remain intact, the bulls still have a slight hope," they write. "But should those levels break and the markets close below (which now seems more likely), it would be a clear sign that the bears have taken over and are starting to feast," they conclude.