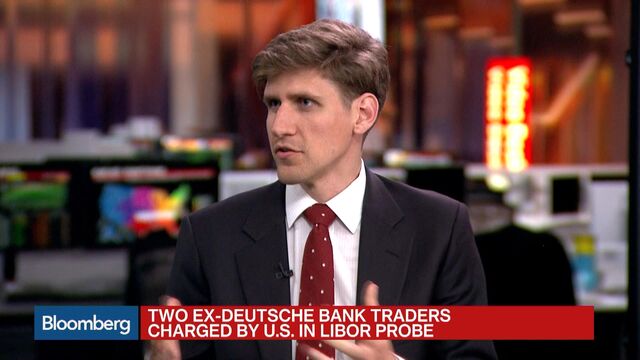 Two former Deutsche Bank AG traders face federal charges in New York tied to the rigging of benchmark interest rates, as the Justice Department signaled that its investigation is reaching progressively higher within the German lender.

The indictment, made public Thursday in federal court in Manhattan, shows that authorities are continuing to pursue individual bankers eight years after opening investigations into manipulation of the London interbank offered rate, known as Libor. The intervening years have highlighted the difficulty in bringing such cases to a successful close -- with U.K. authorities failing to secure several convictions and the U.S. facing potential challenges in extraditing suspects for trials.

Matthew Connolly, 51, who was a supervisor in New York, and Gavin Black, 46, a London trader, were charged with one count of conspiracy to commit wire and bank fraud, and nine counts of wire fraud. Connolly, who made his initial court appearance Thursday, pleaded not guilty and was released on a $500,000 bond, according to court records.

For details on how the Libor scheme was organized, click here.

Connolly and Black conspired to manipulate Libor in a scheme that ran from 2005 to at least 2011, according to the indictment, with the participation of more than a half dozen other individuals at the bank, including managing directors and a vice president on desks that spanned Europe, North America and Asia.

At least one person who was senior to Connolly and Black is under Justice Department scrutiny in the matter, Bloomberg News has reported. That person is David Nicholls, who oversaw Deutsche Bank’s global finance and currency forward-trading desks from London until he left in early 2013, two people familiar with the investigation said in October.

Nicholls, who these people said is among several under investigation by the Justice Department, is the most senior bank executive to come under scrutiny as prosecutors have sought to hold individuals to account for manipulating financial benchmarks.

Connolly’s lawyer, Ken Breen of Paul Hastings LLP, said that the allegations against his client are untrue and that Connolly “looks forward to clearing his name.” Black, who isn’t in custody, couldn’t be reached for comment. A lawyer for Nicholls didn’t immediately respond to an e-mail seeking comment. Deutsche Bank declined to comment.

“Millions of people around the world rely on Libor and other global financial benchmarks as accurate and honestly-reported rates,” Assistant Attorney General Leslie Caldwell said in a statement. “Manipulation of these rates undermines the integrity of our financial system, and the Justice Department will continue to hold accountable both the financial institutions and the individuals responsible for this conduct.”

Unlike other investigations of misconduct in the banking industry, in which the U.S. has struggled to bring cases against individuals, the Libor probe has now led to charges against 15 bankers and brokers. Of those, two former Rabobank Groep traders were convicted at trial while another four -- three from Rabobank and one from Deutsche Bank -- pleaded guilty.

The U.K. Serious Fraud Office, by contrast, has had mixed results. After winning a conviction of a former UBS Group AG trader, Tom Hayes, the purported mastermind of the Libor scheme, U.K. officials lost a trial against six ex-brokers accused of helping him. Five former Barclays Plc traders are on trial in London.

Deutsche Bank agreed in April 2015 to a record $2.5 billion global settlement with U.K. and U.S. agencies, including the Justice Department, for manipulating Libor and similar benchmarks. More than a dozen banks have paid a combined $9 billion in penalties in relation to interest-rate rigging over the last four years.

The charges against Connolly and Black come nearly eight months after one of their colleagues, Michael Curtler, the bank’s head of global finance, pleaded guilty to conspiracy.

Connolly, who lives in Basking Ridge, New Jersey, is the first U.S. banker to be charged in the Libor investigation. Connolly was Deutsche Bank’s director of the pool trading desk in New York, where he supervised employees trading Libor-based derivative products linked to the U.S. dollar, according to prosecutors. At his arraignment on Thursday, he was ordered by U.S. District Court Judge Colleen McMahon to return to court on Sept. 21.

Prosecutors said that Connolly and Black worked with their colleagues, including Curtler, to submit fraudulent Libor submissions in order to benefit their trading positions.

Deutsche Bank’s positions were opposite those of at least four banks that lost money in the scheme, according to the indictment. They included unnamed lenders in Pittsburgh and New York and another with headquarters in Charlotte, North Carolina. Bank of America Corp. is based in Charlotte.

The indictment quotes numerous messages exchanged by the Deutsche Bank employees requesting that their “submitter” modify the bank’s reports to the British Bankers’ Association, which was in charge of collecting interbank borrowing rates, to give them a trading advantage.

‘Will Do Our Best’

In August 2007, for example, Connolly e-mailed an unnamed submitter about one-month Libor. “If possible, we need in NY 1mo libor as low as possible next few days ... tons of pays coming up overall ... thanks!” Connolly wrote.

“Will do our best Matt,” the employee wrote back.

Black was among several traders fired by the bank as part of its settlement with U.S. and U.K. authorities. At the time, the New York Department of Financial Services named Black and six other traders whom it said should be dismissed.

The misconduct involved at least 29 Deutsche Bank individuals including managers, traders and rate-submitters, primarily based in London but also in Frankfurt, Tokyo and New York, according to the U.K. Financial Conduct Authority.

Months earlier, Black and another trader filed a lawsuit against Deutsche Bank in London over several million dollars in prior bonus payments. Black later withdrew his claim.

Nicholls isn’t named in the latest indictment. Nicholls, a native of Canada, hasn’t been publicly charged, and investigators were considering whether they had enough evidence to prosecute, said the people familiar with the matter, who asked not to be identified because the probe is confidential.

Prosecutors appear to have had Nicholls in their sights since at least April 2015, when the U.S. reached its settlement with Deutsche Bank. Documents filed by the Justice Department in that case referred to “Senior Manager-1,” who was present when Deutsche Bank submitters received requests to manipulate Libor. That manager is Nicholls, the two people familiar with the investigation have said.

— With assistance by Rebecca Spalding, Patricia Hurtado, and David McLaughlin

(Updates with comment from Connolly’s lawyer in seventh paragraph.)
Published on June 2, 2016, 11:14 AM EDT
Updated on June 2, 2016, 5:23 PM EDT
Have a confidential tip for our reporters?
GET IN TOUCH
Before it's here, it's on the Bloomberg Terminal.
LEARN MORE