Death of a Shale Man: The Final Days of Aubrey McClendon

Death of a Shale Man: The Final Days of Aubrey McClendon 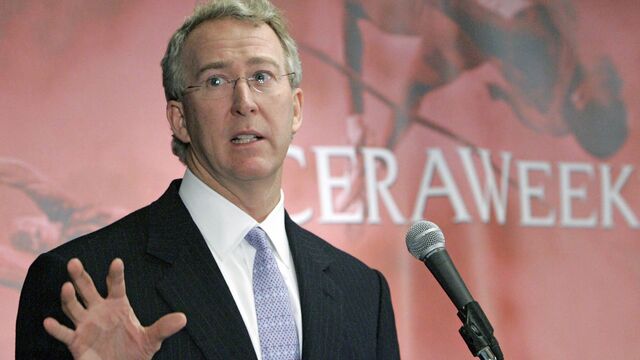 Aubrey McClendon awoke that Tuesday, as he had 10,000 times before, ready to work a deal.

McClendon, co-founder of Chesapeake Energy Corp., had ridden more wild ups and downs in America’s energy patch than just about anyone. But on March 1, as the world closed in on him, McClendon had something else on his mind. That morning he was e-mailing about a riverfront development in his hometown of Oklahoma City, the place where he’d gambled so much for so long.

The 56-year-old sounded upbeat, optimistic -- he sounded, in short, like himself.

Twenty-four hours later, he was dead.

By now the world knows the broad outlines. On the morning of March 2, hours after being accused of rigging bids for oil- and gas-drilling rights, McClendon slipped away from his security team and climbed into his 2013 Chevy Tahoe. He sped north along a lonesome two-lane stretch of Midwest Boulevard, toward the prairie-scrub city edge, where he drove his SUV into a wall at high speed.

The news reverberated through Oklahoma City like a thunderclap. There, and as far away as Riyadh and Caracas, everyone in the energy game knew the backstory. McClendon, the man who’d told OPEC to go to hell, had vowed to fight the indictment. Then this: the tragic end to a life that seemed to epitomize America’s shale boom -- and its bust.

A week on, with many still struggling to make sense of it all, the circumstances surrounding McClendon’s death are only now coming into focus. Police in Oklahoma City say they have yet to determine if the crash, which involved no other vehicle, was intentional. Emails McClendon sent to business associates hours before held no clues, no hints of trouble.

"It is hard for us to comprehend that he is really gone,” Tom Blalock, an executive at American Energy Partners LP, the venture McClendon founded after Chesapeake ousted him, told the some four-thousand people gathered at Crossings Community Church in Oklahoma City on Monday at a public memorial.

Yet, right to the end, McClendon seemed to be hatching plans.

That was pure McClendon. His rise and fall was the stuff of legend. He grew to become a towering figure by building Chesapeake into a $37.5 billion company, thanks to his championing of controversial hydraulic fracturing. But the very gas boom he helped create caused prices to plummet, clipping the company’s value by more than half and triggering a shareholder revolt that led to McClendon’s ouster.

He then formed American Energy Partners and raised more than $10 billion to amass drilling rights from the Appalachian Mountains to Australia and Argentina. But that business, too, would soon buckle under the weight of collapsing energy prices.

This is the story of his final days, pieced together from interviews with people who spent time with McClendon or were in touch with him during his last week of life. The picture that emerges is one of a man emboldened and energized -- and eager to turn a new corner.

Like everyone in the shale patch, McClendon -- cocky, bold, seemingly indefatigable -- had been staring down the collapse in energy prices for months. But his world darkened considerably in the week before the crash. As of Friday, Feb. 26, one of his biggest financial backers, the Energy & Minerals Group, a private-equity firm led by John Raymond, had all but cut ties with him, according to a letter Raymond later sent to investors. That raised immediate questions about American Energy’s viability.

That afternoon, he drove over to Pops on Avondale Drive in Nichols Hills Plaza, one minute away from his sprawling white stone house. A modern rendition of a classic mid-century diner, Pops features about 500 types of soda, from Catoosa Cream to Grape Plains, and an All-American menu ranging from BBQ wraps to quarter-pound deep-fried hot dogs. It’s one of a half-dozen or so restaurants he co-owned around Oklahoma City, including the original Pops, famous for its 66-foot-high sculpture of a soda bottle on the side of the famed Route 66, 30 minutes outside of town.

Later that day, McClendon visited another restaurant venture in the same shopping center, the swanky Coach House. It has been a city fixture since it opened in 1985, during one of the toughest economic slumps in modern Oklahoma history. He often used the back room as an extension of his office, entertaining visiting bankers and businessmen with plates of duck-fat fries and his encyclopedic knowledge of wine. McClendon was there to meet with co-owner Kurt Fleischfresser to discuss renovation plans. He had just one question: Would they keep the back room as the work continued? Fleischfresser assured him they would.

“He had a super amount of energy,” Fleischfresser said. “He always made you want to do good because he was so excited to do it.”

Good news, though, was scarce for McClendon everywhere he went, even an outing on Saturday night to watch a Thunder game, the basketball team he partially owned and helped bring to Oklahoma City from Seattle. Wearing a blue-shirt, sleeves rolled-up, he took his usual front-row seat on the baseline near the Thunder bench.

What looked to be a brief respite from his business woes turned into a heart-breaker. McClendon could only stand with his hands at his sides as Golden State Warriors’ star Steph Curry sank a last-second three-pointer to hand the Thunder an overtime loss. McClendon left the same way he always did, walking through the private back corridor of Chesapeake Arena.

By Tuesday morning -- one day before he died and just hours before the world learned of his indictment -- McClendon was still firing off e-mails on future projects.

Among those he messaged was Mike Knopp, a lawyer-turned-rowing-coach who was as close to McClendon as just about anyone. The pair had been working on the final phase of a decade-long project to transform a waterless, grassy ditch steps from downtown into a $100 million Olympic rowing venue. The nonprofit Oklahoma City Boathouse Foundation, with McClendon as chairman and Knopp as executive director, was two weeks away from completing a white-water rapids course for the May 7 U.S. Olympic slalom trials.

In McClendon’s final e-mail exchange with Knopp, the subject was mundane: trying to find a date for their next foundation board meeting.

At around 5:30 p.m., a federal grand jury in downtown Oklahoma City handed up the indictment. McClendon quickly cried foul.

“I have been singled out as the only person in the oil and gas industry in over 110 years since the Sherman Act became law to have been accused of this crime in relation to joint bidding on leasehold,” McClendon said in a statement within hours of the indictment. “I will fight to prove my innocence and to clear my name.”

‘Good to See You’

Around 8:00 a.m. the next morning, a business associate received an e-mail from McClendon. The two had bumped into each other the evening before at an Oklahoma City restaurant where McClendon was dining with his daughter, Callie Katt. McClendon seemed normal, the person later told Marcus Rowland, who spent 18 years as Chesapeake’s chief financial officer under McClendon. The e-mail was little more than a "good to see you last night" and discussion of some business matters, Rowland said.

Not long after McClendon sent that message, he climbed into his SUV and drove off. As he cruised north along a two-lane country highway, he picked up speed, traveling well above the posted 50 miles per hour. With thick, bushy trees on both sides of the road , McClendon had limited maneuvering room. His car collided with a concrete wall supporting a highway overpass at 9:12, according to the initial police report.

The details of the crash still have police investigators scratching their heads: The front-end of his car hit the overpass support head-on. They have yet to determine whether it was an accident or a suicide but their early comments suggest the embattled shale tycoon may have intentionally crashed his car.

"He pretty much drove straight into the wall," police officer Paco Balderrama said shortly after the crash. “There was plenty of opportunity for him to correct and get back on the roadway, and that didn’t occur."

As dusk set on the desolate site one day after the crash, Oklahoma’s famous red-toned dirt had turned an acrid, charred black. A makeshift memorial marked the site of impact: yellow and red roses placed carefully at the base of two crosses adorned with baseball caps and draped with pink and white polka dot ties -- one of McClendon’s favorite patterns. A single, white Chesapeake hard hat lay in the dirt.

— With assistance by Joe Carroll, Alex Nussbaum, and Dan Murtaugh