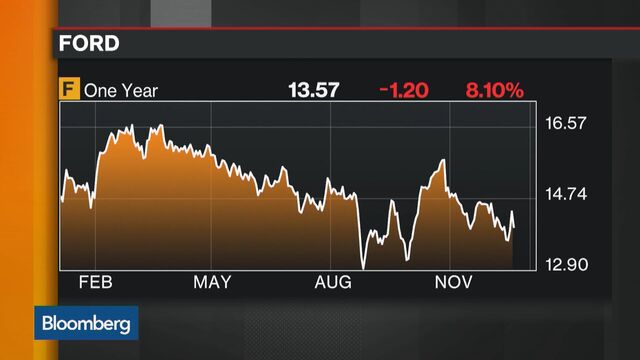 Fiat Chrysler Automobiles NV, Ford and General Motors ended 2015 with December sales gains that, while lower than analysts predicted, did little to dispel the idea the year was one for the record books.

Automakers rode a wave of demand for light trucks as gasoline prices hovered at about $2 a gallon. Fiat Chrysler and Toyota Motor Corp. each posted increases of at least 11 percent, while Nissan Motor Co. led with a 19 percent jump. Shares of Ford and GM fell after they failed to make the gains of at least 10 percent analysts predicted.

With the strong demand, Ford said the industry’s discounts didn’t have to rise as much as analysts predicted, accounting for the miss by some automakers. By the time Tuesday’s reports conclude, analysts still predict sales will topple the annual American record set 15 years ago, buoyed by Americans’ renewed love of pickups and SUVs, cheap gasoline, easy credit and a strengthening labor market. Industrywide sales were forecast to exceed an 18 million sales rate for a record fourth straight month.

“Missing one month for the domestic consensus isn’t a big deal,” said Jessica Caldwell, an analyst with automotive pricing website Edmunds.com, in a telephone interview. “It doesn’t take away from the larger picture of just how strong auto sales were in December and, really, all of 2015 -- and how they’re set up to continue in 2016.”

Among the results for individual automakers:

A confirmed record for 2015 would mark a sixth straight year of growing U.S. sales, the longest streak since World War II. The surge is owed in part to buyers who were soothed by job and wage growth, falling gasoline prices and carmakers who upgraded their lineups and used discounts and cut-rate financing to draw shoppers to showrooms.

“The economy is just so much better now,” said Michelle Krebs, senior analyst at AutoTrader.com. “Low gas prices put more money back into the household budget, you’ve had cheap and widely available credit and the automakers are putting out very compelling products, with a ton more in safety features, technology and far better fuel economy.”

The Federal Reserve signaled its own confidence in the economy when it raised interest rates for the first time since 2006 in December, moving away from its unprecedented stimulus program and promising any future increases would be gradual. Morgan Stanley’s Market Implied Pace of Rate Hikes Index suggests the Fed will carry out three 0.25 percentage-point rate increases in the next year.

“We expect a negligible impact on auto sales from last week’s increase,” Oliver Strauss, chief economist at the vehicle valuation research firm TrueCar Inc., said in a Dec. 22 statement. “The rate is still quite low amid an expanding economy.”

— With assistance by John Lippert

(Updates with Honda and Volkswagen results.)
Have a confidential tip for our reporters?
GET IN TOUCH
Before it's here, it's on the Bloomberg Terminal.
LEARN MORE