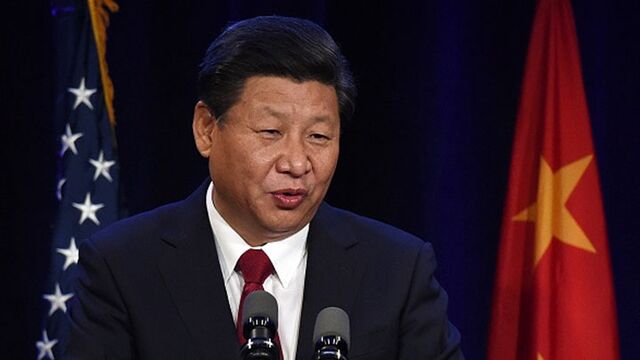 China’s president signaled policy makers will accept slower growth, but not much slower, as details of a blueprint set to define his term as leader were released Tuesday.

Annual growth should be no less than 6.5 percent in the next five years to realize the goal to double 2010 gross domestic product and per capita income by 2020, President Xi Jinping said Tuesday, according to the official Xinhua News Agency. The 13th five-year plan, details of which were announced Tuesday, is the first to confront an era of sub-7 percent economic growth since Deng Xiaoping opened the nation to the outside world in the late 1970s.

"Policy makers still want to maintain a high growth pace, while the policy expectation is tuned slightly lower," said Tao Dong, chief regional economist for Asia excluding Japan at Credit Suisse Group AG in Hong Kong. "The stance of policy makers is to gradually transform to a ’new normal.’ But to maintain the peoples’ confidence, the bar is set relatively high."

China will seek to increase the yuan’s convertibility in an orderly manner by 2020 and change the way it manages currency policy, according to the Communist Party’s plan. Authorities will opt for a “negative list” foreign-exchange system -- an approach that lets companies do anything that’s not specifically banned -- and open the finance industry as it promotes the yuan’s inclusion in the International Monetary Fund’s Special Drawing Rights basket, Xinhua reported.

The proposals coincide with heightened anxiety over China’s economic outlook following a stock market slump and a surprise yuan devaluation in August that roiled global markets. China will target medium- to high-speed growth during the period, and officials pledged to reduce the income gap, further open up to overseas investment and boost consumption, according to the draft.

Officials said they will accelerate financial system reform and promote transparent and healthy capital markets while also overhauling stock and bond sales. They’ll continue reforms of the fiscal and tax systems and transfer some state capital to pension funds.

More fiscal support will be devoted to lifting 70 million Chinese out of poverty by 2020. The plan aims to step up poverty reduction efforts and continue promoting the renovation of shantytowns. The social insurance system will be improved and the public hospital system will be reformed.

Xi’s growth baseline matches guidance provided by Premier Li Keqiang, who said in a speech Sunday that China needs average growth of more than 6.5 percent in the next five years to meet the goal of achieving a “moderately prosperous” society by 2020. Xi and Li are managing the priorities of both reforming the economy and keeping short-term growth fast enough so that structural changes don’t cause a hard landing.

It’s still possible to maintain growth at about 7 percent, the government’s current goal, despite the many uncertainties facing the economy, Xi said, according to an explanation of the 2016-2020 plan released by Xinhua.

Private economists had predicted a reduction in the five-year growth target to 6.5 percent or less, down from 7 percent in the current plan -- a reflection of the Communist leadership’s continuing attempts to move away from debt-fueled expansion. A formal growth target is expected to be released once the five-year plan is endorsed at a party gathering in March.

The economy expanded 6.9 percent in the three months through September from a year earlier. While that beat economists’ estimates for 6.8 percent, the expansion benefited from an out-sized contribution from financial services after a surge in share trading from the year-earlier period.

China has pushed to bolster global usage of the yuan before an IMF review of its reserve-currency basket as early as this month.

“The time-frame for yuan convertibility is well expected,” said Nathan Chow, an economist at DBS Bank Hong Kong Ltd. "For the yuan to be freely usable, China needs to further improve its financial system, including banking, stock and bond markets. All these reforms take time."

— With assistance by Xiaoqing Pi, and Kevin Hamlin

(Adds Xi's 7% growth comment under `Current Goal' subheadline.)
Have a confidential tip for our reporters?
GET IN TOUCH
Before it's here, it's on the Bloomberg Terminal.
LEARN MORE