Emerging Markets Brace for Capital Flight Amid Echo of 2013

Emerging Markets Brace for Capital Flight Amid Echo of 2013

Emerging Markets Brace for Capital Flight Amid Echo of 2013
Markets 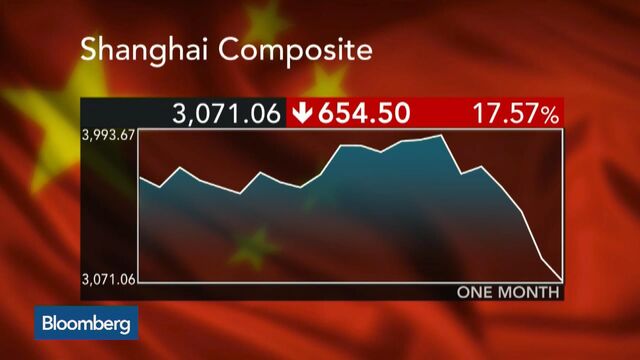 Some Chinese agencies involved in economic affairs have begun to assume in their research that the yuan will weaken to 7 to the dollar by the end of the year, said people familiar with the matter.

The research further factors in the yuan falling to 8 to the dollar by the end of 2016, according to the people, who asked not to be identified because the studies haven’t been made public. Those projections -- which suggest a depreciation of more than 8 percent by Dec. 31 and about 20 percent by the end of 2016 -- were adopted after the currency was devalued this month and compare with analysts’ forecasts for the yuan to reach 6.5 to the dollar by the end of this year.

While the rate used in the research isn’t a government target, it suggests China may allow the yuan to fall further after a depreciation in which the currency was allowed to weaken by nearly three percent on Aug. 11 and 12. The yuan weakened for a second day in Shanghai to 6.4124.

“It wouldn’t be totally unreasonable for China to allow a weakening like this,” said Zhou Hao, an economist at Commerzbank AG in Singapore, referring to the 7 level against the dollar at the end of this year. “A certain level of depreciation can be accepted according to China’s international payments situation, but it may bring unforeseeable pressure on foreign debt repayments and capital outflows.”

As China faces capital outflow and currency depreciation pressures, a strategy of preventing the yuan from weakening by intervening may consume a lot of China’s “hard-earned” foreign exchange reserves, Yu Yongding, a former academic member of the monetary policy committee at the People’s Bank of China, said on Monday.

“In my view, China has to take more dramatic moves on the exchange rate policy,” he said, adding that interventions should be minimized to let the market decide the currency’s level. “I don’t believe the yuan will depreciate sharply, say 20 percent -- after all, China still has a huge trade surplus.”

The rate used in the research constitutes reference levels used for economic assessments and projections, according to the people. The PBOC didn’t respond to a fax seeking comment.

A dollar-yuan rate of 7 would be a more than 8 percent depreciation from Tuesday’s level. At an Aug. 13 briefing on the yuan, PBOC Deputy Governor Yi Gang dismissed the idea that China would devalue the yuan by 10 percent to boost exports, calling it “nonsense.”

There is a 9 percent chance the yuan will be at or weaker than 7 per dollar at the end of this year, according to Bloomberg calculations based on implied volatility levels from the options market. A level of 8 or weaker a year from now is given less than a 5 percent chance.

For more, read this QuickTake: The People’s Currency

The central bank on Tuesday added the most funds to the financial system in open-market operations in six months and sold the cheapest treasury deposits in five years as efforts to prop up the yuan strained the supply of cash.

Major banks have been seen selling dollars toward the close of onshore trading in Shanghai on most days since the surprise yuan devaluation on Aug. 11. The intervention removes funds from the financial system and risks driving borrowing costs higher unless the monetary authority releases additional cash. China’s foreign-exchange reserves will drop by some $40 billion a month for the rest of this year, according to the median of 28 estimates in a Bloomberg survey this month.

Chinese shares plummeted to extend the steepest four-day rout since 1996 on concern the government is abandoning market support measures. The Shanghai Composite Index tumbled 7.6 percent to 2,964.97 at the close, sinking below the 3,000 level for the first time in eight months.

— With assistance by Steven Yang

(Updates with comment from former PBOC advisor from fifth paragraph.)