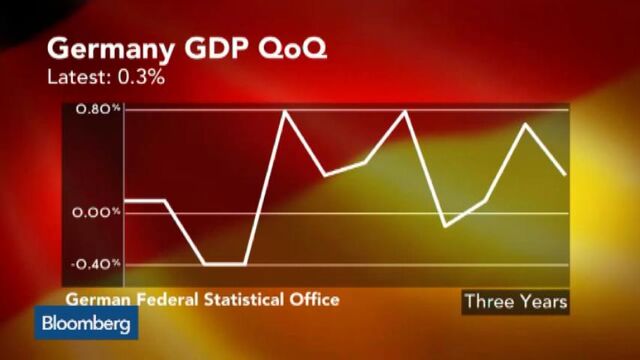 Germany Did Not Need QE in the First Place: Moec

Euro-area growth quickened in the first quarter as stronger-than-predicted performances from France and Italy made up for weaker momentum in Germany.

Gross domestic product in the region rose 0.4 percent in the first three months of the year after expanding 0.3 percent in the previous three months, the European Union’s statistics office in Luxembourg said Wednesday. That’s in line with the median of 42 estimates in a Bloomberg survey. Greece fell back into recession.

The euro-region economy benefited from the sharp drop in oil prices since the second half of 2014, a weaker currency and a boost to confidence from the prospect of more European Central Bank stimulus. Policy makers have warned that the upswing may not be sustainable unless governments step up economic reforms, while there are also risks related to the Greek crisis that threatens to splinter the currency bloc.

“The euro zone’s economic recovery firmed moderately in the first quarter,” said Christian Schulz, senior economist at Berenberg Bank in London. “Strong tailwinds from cheap oil, a weaker euro and a much more aggressive ECB helped across the currency area, while the Russian risk receded and Greece’s tragedy has not had a major impact outside Greece itself.”

Euro-area zone GDP data are measured primarily on a quarter-on-quarter basis, contrasting with the U.S. approach of looking at annualized data.

While German growth slowed more than predicted, economists say the nation’s recovery is not at risk. GDP rose 0.3 percent from the fourth quarter, when it was up 0.7 percent. The expansion was driven mainly by domestic demand, the country’s statistics office said. Private and government consumption rose and both construction and equipment investment picked up markedly from the previous quarter, while net trade weighed on the economy.

“The German economy managed an impressive comeback at year-end 2014, and this trend of accelerating economic activity remains intact,” said Martina von Terzi, an economist at UniCredit Bank AG in Munich. “More is likely to come in 2015. We expect economic activity to show solid growth in the coming quarters.”

The French economy beat estimates with growth of 0.6 percent, the fastest pace in almost two years, in what may mark the start of a more sustained economic revival after three years of sluggish growth. The Commission and the International Monetary Fund both see expansion of in excess of 1 percent this year, more than twice the annual pace recorded since President Francois Hollande came to power in 2012.

That would still be below the rate projected for the euro area. The European Commission raised its outlook for the region on May 5, predicting GDP will increase 1.5 percent in 2015.

“The French result exaggerates economic momentum,” said Stefan Kipar, an economist at Bayerische Landesbank in Munich. “Growth is only supported by strong private and government consumption, which seems to have been primarily supported temporarily by a weaker oil price. Investment and trade once again disappointed.”

Spain, where the government has liberalized the labor market and tackled the legacy of bad debt held by banks since being hit by the crisis, recorded its fastest growth in seven years in the quarter. The economy expanded 0.9 percent and is set to grow almost twice the speed of the euro area this year.

“The economic situation and the short-term outlook for the euro area are currently brighter than they have been for several years,” ECB President Mario Draghi said on April 17. He added that the “sluggish pace at which structural reforms are being implemented” will likely weigh on growth.

Greece may yet throw a spanner in the works. The economy fell back into recession as bickering among euro-area governments failed to reach an agreement to unlock bailout funds and prevent the country from running out of money. ECB policy makers have signaled they’re ready to tighten Greek banks’ access to emergency funding if progress on a deal isn’t made.

Dutch Finance Minister Jeroen Dijsselbloem said after talks in Brussels on Monday that the parties are making “faster progress” toward a deal.

“Everything we hear on Greece is calculated optimism because nobody wants to take the blame for a potential exit,” said Thomas Harjes, senior economist at Barclays Plc in Frankfurt. “Now it’s time for the Greek government to decide what they want to do.”

(For Economy Columns: NI ECOCOL. To receive this daily: SALT ECOCOL.)
Have a confidential tip for our reporters?
GET IN TOUCH
Before it's here, it's on the Bloomberg Terminal.
LEARN MORE